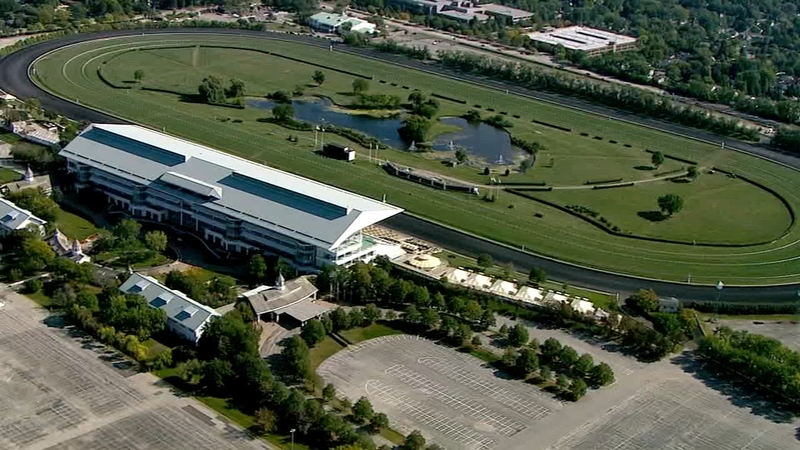 The Bears and Churchill Downs Incorporated signed a Purchase and Sale Agreement this week for the entire Arlington Park land parcel in the village of Arlington Heights, a news release from the Bears said.

In a statement, a spokesperson from Chicago Mayor Lori Lightfoot's office said Tuesday night that the mayor was not surprised by the move, and that they remain committed to keeping the Bears in Chicago. The spokesperson said they have informed the team they are open to discussions.

The spokesperson went on to note that Soldier Field recently signed a major contract with the Chicago Fire soccer team, and over the weekend hosted the Shamrock Series.

"These examples and others demonstrate that Soldier Field remains a very sought-after venue and, as the Mayor has said many times, the City and Park District must explore all options to both enhance the visitor and fan experience at Soldier Field year-round and maximize revenues," the spokesperson said in a statement.

"As for the Bears, the Mayor has said numerous times, our door in City Hall remains open to engage the Bears," the spokesperson added.

The Chicago Bears have signed an agreement to purchase Arlington Park, a spokesperson for Mayor Lori Lightfoot said Tuesday night.

"Arlington is not the surprise, the surprise is that the Bears management has finally figured out how to conduct itself and how to double the value of its franchise by looking at Arlington," said Lester Munson, sports writer and legal affairs journalist.

It was first reported that the Bears had submitted a bid to buy Arlington International Racecourse in June, and drew mixed reactions from fans. It is not the first time the NFL team has considered moving the team out of the city.

"Congratulations to the Chicago Bears for their professionalism and perseverance. It is clear they are committed to an exciting vision for their team and their fans. We wish them the greatest success and are excited for the opportunity this brings to the Village of Arlington Heights and the future economic development of this unique property," he said.

The property is 326 acres, enough to allow the Bears to build a stadium large enough to host a Super Bowl, and it could be surrounded by a year-round entertainment complex.

Arlington Heights Mayor Tom Hayes said he "could not be more excited about the news."

"My goal for any redevelopment has always been to put this prime piece of real estate to its highest and best use, and I can't think of a higher and better use than this one," Hayes said. "There is a long way to go as we begin this journey, and many issues for the community to discuss, but the Village is committed to working with the Bears organization and all stakeholders to explore this opportunity for Arlington Heights and the northwest suburban region."

Bears fans were lighting up the phone lines on the Kap & J.Hood show on ESPN 1000 Wednesday morning.

Mayor Lightfoot said she remains committed to keeping the team in Chicago but doesn't want to kick taxpayers around, with a price tag in the billions.

The Chicago Bears confirmed Wednesday that they have signed a deal to purchase property around Arlington international racecourse.

"As a mayor, as a Bears fan, I'm going to continue to do what I can to keep them here in the city of Chicago, and I don't think that door is closed by any means, but I also need to make sure that, first and foremost, I'm doing what's best for the taxpayers of the city," she said.

Soldier Field is the smallest NFL stadium, with no room to expand. In the late 1980s the Bears flirted with moving to an empty lot on the West Side, and 20 years ago they considered moving out of Soldier Field before working out a deal with then-mayor Richard Daley to stay on the Lakefront.

"In some ways the Bears, right, in that situation, did it to themselves," said Allen Sanderson, professor of economics at the University of Chicago. "They could have had a much bigger and better ballpark 20 years ago, and they chose not to do that."

The Bears' lease at Soldier Field runs to 2033, which means the team would have to pay $84 million to the city to break it. The mayor said she has no plans to let the football team out of their lease just because they are unhappy with it, but she also said the Bears have never said what they want from the city in order to stay.

"I saw George McCaskey back in June and said at that time, we're ready, willing and able," Lightfoot said. "Not much has happened over the course of the summer, we were supposed to meet yesterday but they canceled the meeting."

In a statement, Bears President and CEO Ted Phillips said:

"We are excited to have executed a Purchase and Sale Agreement (PSA) for the Arlington Park property. We are grateful to Churchill Downs Incorporated for their efforts to reach this point. We also appreciate the support of Mayor Tom Hayes and the Village of Arlington Heights. Finalizing the PSA was the critical next step in continuing our exploration of the property and its potential. Much work remains to be completed, including working closely with the Village of Arlington Heights and surrounding communities, before we can close on this transaction. Our goal is to chart a path forward that allows our team to thrive on the field, Chicagoland to prosper from this endeavor, and the Bears organization to be ensured a strong future. We will never stop working toward delivering Bears fans the very best experience. We will continue to provide updates on our progress at the appropriate time."

How do Bears fans feel about the possibility of them moving out to the burbs? They may be less angry than you think.

Mike Hennesy loves the Bears. He's had season tickets for 15 years. And he's not against change.

"I have been to Lambeau to see the Bears play the Packers, and they got a great stadium up there," he said. "And I think we just got a lot more and so I'm excited that maybe Arlington Heights could be redeveloped in a way to get, to give us a truly first class, you know, stadium."

Hennesy said the modern NFL demands more of everything: More restaurants, museums, and more room to move, to overcome what he called the desolation of Soldier Field. He has no plans to give up his tickets.

"I have also been doing some quick calculations of community and I'm feeling that I would be in the positive from my location, actually, anyway, going to Arlington Heights instead of having to commute to the city," he said.

Sports reporter Dionne Miller explained why the Bears Arlington news can be good for the team.

Many South Side businesses and venues benefit from Bears game days at Soldier Field, and there are mixed emotions on what would be a monumental move to the North Suburbs.

"We are deeply rooted in tradition on the South Side so I think for her, we do our bus trips out of here to go to Soldier Field for the game, people come back here, afterwards is a party all day, like pregame here, tailgate. I think everything would be different if they were in Arlington Heights," said Katie Connolly.

"The fans seem very excited about something new when it comes to the new Bears stadium," said Jonathan Hood of the Kap & J.Hood show. "I can understand the attachment part of it, but the city failed to get this done. Arlington Heights is gonna have a stadium, and I'm really excited about it."

If the Bears build a stadium in Arlington Heights, it could be a big boon for residents and businesse sin town.

"This whole downtown area is full of restaurants and bars so we can provide exactly what fans are looking for," said Larry Rebodos, Big Shots Piano Bar.

Professional football could be a boost to existing businesses along with a bunch of new ones.

"There's potential to add more in surrounding communities, a well as at Arlington Park," said Mark Meskauskas of Brian Properties.

Downtown Arlington Heights is just a short distance from the potential new stadium. On this day it is full of al fresco diners on the closed streets. But officials are looking forward to filling it with Bears fans on Sunday afternoons.

"With the small businesses we represent it's nice to have a positive news day to show there's things on the horizon they can look forward to with the businesses," said Jon Ridler, Arlington Heights Chamber of Commerce.