CHICAGO (WLS) -- New Chicago Bears general manager Ryan Poles was a busy man in his first draft. He added 11 players over the final two days after sitting out the first round and addressed needs in all areas.

The Bears originally acquired Foles two seasons ago in a trade from Jacksonville for a fourth-round pick.

Thursday night marked the high point of the NFL's offseason with the league's annual draft in Las Vegas. It's the first time the draft has been held in Vegas. The city was slated to host the event in 2020 but that plan was scrapped due to the pandemic.

The Bears did not have a pick in the first round this year after trading up to pick quarterback Justin Fields last year. However, the Bears did have two second round draft picks, at 39th and 48th overall.

Gordon had 46 tackles - two for loss - and two interceptions to go with a team-high seven pass breakups in 12 starts last season. Washington went 4-8 and finished fifth in the Pac-12 North with a 3-6 mark in conference play.

The team later selected Jaquan Brisker, a safety from Penn State, with the 48th overall pick.

"You just got the steal of the draft."

Brisker, who spent two years at Lackawanna Community College, was a second-team All-American as a senior last season. He had 64 tackles and 51/2 for loss to go with two interceptions and five pass breakups in 12 games despite a banged up shoulder. He opted out of the Outback Bowl loss to Arkansas to prepare for the draft.

With the 71st overall pick, the Bears drafted Velus Jones Jr., a wide receiver from Tennessee.

Saturday, the Bears traded for more picks in the fifth, sixth and seventh rounds.

The first pick of the day was Southern Utah OT Braxton Jones as the 168th overall pick. 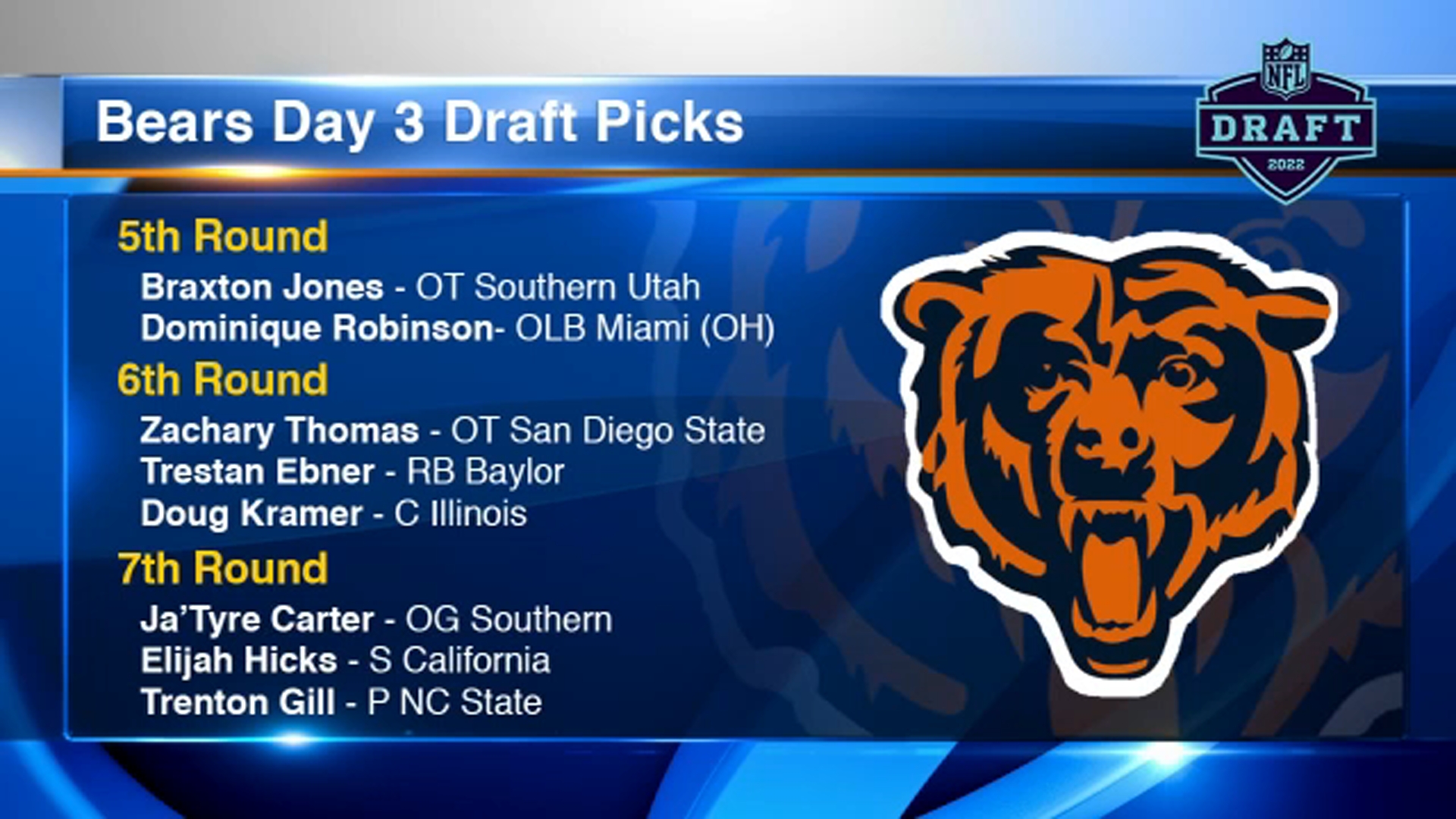 Kramer grew up wearing Brian Urlacher and Devin Hester jerseys and added Olin Kreutz's to the mix once he started playing offensive line, according to the Associated Press. Kramer also played with Kreutz's son Josh, an offensive lineman, at Illinois.

"Growing up at that position in Chicago, that was the guy you were gonna look at because you knew he was the toughest guy on the field," Kramer said. "He was gonna get after people. Every young kid in Chicago is trying to emulate what he did on the field."

The Bears went 6-11 last season and missed the playoffs for the ninth time in 11 years. That convinced chairman George McCaskey to make big changes, so he fired former GM Ryan Pace and coach Matt Nagy and replaced them with Poles and Matt Eberflus.

Poles has been reworking the roster, trading star pass rusher Khalil Mack to the Los Angeles Chargers. His most notable free agent signing was a three-year agreement with former Cincinnati Bengals defensive tackle Larry Ogunjobi that got wiped out because of a failed physical.

The Bears came in with issues to address on both sides, considering their offense ranked among the NFL's worst last year and the defense switching to a 4-3 front after playing a 3-4 for seven years.