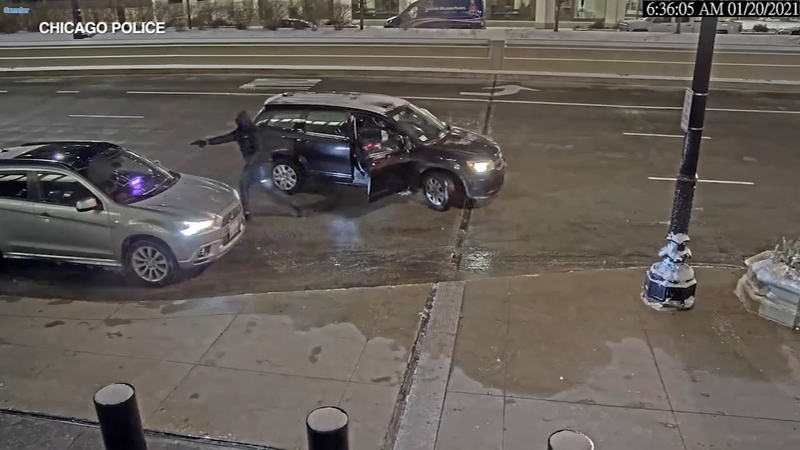 CHICAGO (WLS) -- Chicago police released new video Thursday showing people they say are involved in a string of carjackings and armed robberies, as offices try to keep up with a recent citywide surge.

More than 120 carjackings have been committed since the beginning of this year, according to police. In 2020, carjackings more than doubled over the previous year as police set up a task force to tackle the issue.

One of the latest attempted carjackings took place in Streeterville. The victim said he was waiting for his brother outside a restaurant while his brother picked up their food order, when several people approached him with guns to demand the car. He sped off instead, thwarting their attempt.

"You could tell he was afraid. He was all teary-eyed and everything," said a witness, who asked not to be named. "He said they were sitting here in the car, parked, and some guys just walked up with guns and told them basically to hand the truck over."

A nearby restaurant worker called for help.

In a press conference, Chicago police said the carjacking problem is getting worse, but additional resources are on the way.

"Our plan includes a comprehensive approach that includes an expanded vehicular carjacking task force in collaboration with cities across the region," said CPD Supt. David Brown.

Chicago police said a holistic approach is needed to combat the problem. They said armed criminals are unafraid and very young, mostly teenagers. They've even encountered offenders as young as 12 years old.

Police emphasized that carjacking is a crime of opportunity, and preventing it begins with car owners themselves.

Drivers should take their keys with them, be aware of their surroundings, ensure they're not distracted by their phone, and always lock their car.

Video released earlier Thursday shows a carjacking victim sitting in a parked car around 6:30 a.m. Wednesday in the 200-block of South Wacker Drive as another car pulls up just ahead and stops. The van then backs up, and a man hops out of the passenger's side with a gun. He then takes the parked car at gunpoint.

The 31-year-old rideshare driver said they had just dropped off a passenger in front of the Willis Tower when the incident took place, according to police.

The two cars then drive off, leaving the man standing with hands up as if to say "don't shoot."

Chicago Police said these suspects are linked to other crimes over the past week in the city and suburbs and believe they are using the stolen cars to then rob businesses. They are also suspects in various shootings on the West Side.

"The run in fours, in twos. They usually are in a car. They're usually canvassing and watching their victims," Brown said.

In each incident, the men use vehicles taken in previous armed robberies to commit their crimes.

In one robbery Sunday, which was also captured on video, you can see two men crawling through a Dunkin Donuts drive-thru window in the 5600-block of South Harlem Avenue.

Police said they believe the offenders are linked to armed robberies in Summit, Maywood, Matteson, Palos Heights, Oak Forest, and Oak Park. The robberies are happening during the 6-7 a.m. hours as people are going to work.

CPD said these men are also suspects in shooting incidents and should be considered armed and dangerous.

Police believe there are three to four men in the group, and said they wear black clothing and masks.

"If there's not consequences to the crime you're committing, then you're more likely to keep doing it because there is profit in it," said 29th Ward Alderman Chris Taliaferro.

Ald. Taliaferro is among a group of aldermen, including Michelle Harris and Gregory Mitchell, hosting a public hearing on carjackings Friday in the City Council's Public Safety Committee.

Crimes of opportunity, the have grown exponentially over the last year.

Chicago Police have also issued a warning to residents on the Northwest Side after a series of carjackings near Humboldt Park. At least four incidents have been reported this month at three different locations.

Chicago Police have issued a warning to residents on the Northwest Side after a series of carjackings near Humboldt Park.

Police said there are as many as four suspects -- two men and two teenage girls -- who order a ride-share or taxi then attack the driver and steal the car.

Police said a man was purchasing items from the service window of a gas station at 31st Street and Michigan Avenue when someone jumped out of a vehicle and pointed a gun at him before stealing his Mercedes and cell phone.

Police said the two victims, a man and woman, were in their car in the alley in 3100-block of N. Kimball Avenue just after 6:10 a.m. Thursday when a black Honda CRV with a female driver drove up behind them and two armed men jumped out. The men demanded the car and the woman's personal property before taking off in the victim's car.

No injuries were reported and no one is in custody, police said. Area Five detectives are investigating.

A woman averted a carjacking Thursday morning in Jefferson Park.

The 52-year-old woman said she was inside her vehicle in the 5400-block of North Melvina Avenue around 5:45 a.m. when four men inside a dark blue sedan approached. One of the men got out of the sedan and opened the victim's driver side door and demanded she get out, according to police. Police said the woman refused and started honking the car horn. The man then got back into the waiting sedan without any of the victim's property before fleeing northbound on Melvina then eastbound onto West Foster Avenue, police said.

At least six people were carjacked in Chicago Tuesday evening into Wednesday.

The victims include a man unloading groceries in Jefferson Park, an Uber driver in South Shore, a woman in Roseland and two drivers in the Loop.