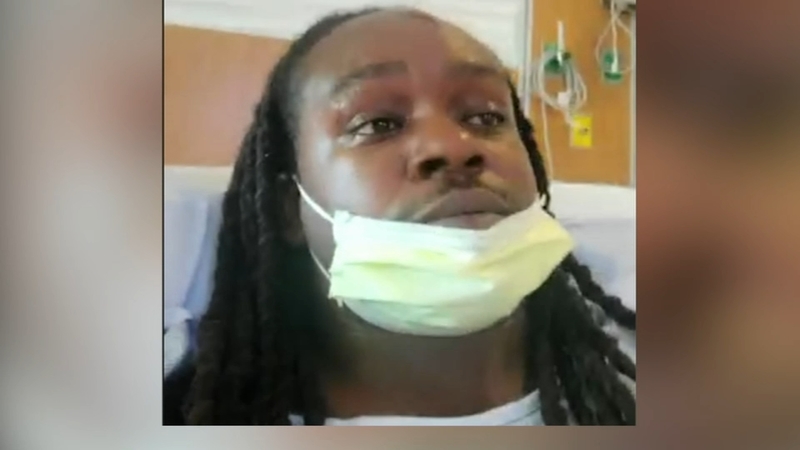 CHICAGO (WLS) -- A carjacking in West Englewood resulted in a crash that seriously injured a young father who was simply an innocent driver.

Chicago police said shortly after midnight in the 9500-block of South Wentworth, their Vehicular Hijacking Task Force spotted a black Dodge Durango that had been taken, at gunpoint from a 36-year-odl man in the 3600-block of South Damen Avenue a little over an hour earlier. It was one of three vehicles carjacked overnight.

Police went to pull the car over, only to watch it run a red light at 95th and Wentworth, slamming into another car in the intersection.

That was James Mitchell, who had been on his way home when he abruptly found himself underneath his smoking, mangled car, barely conscious.

"I ain't never been in this much pain in my life," he said from his hospital bed.

The car came from nowhere.

"That car was going so fast I didn't even see him coming, because I looked before I turned," said Mitchell. "I'm trying to turn, he slammed into me. My car spins out and there's an explosion, and his car flies into the field."

The surveillance video confirms the black SUV never slowed down.

"It knocked me out, and once I woke up I seen a million state troopers and a whole bunch of undercover police," Mitchell said.

Mitchell suffered broken ribs and a fractured back. He is furious at the young alleged criminal who he said could have killed him, and is praying that young man's joyride didn't end his career as a truck driver.

Chicago's carjacking problem continues to get worse. City data shows there have been 1,650 carjackings so far in 2021. Over the same period last year there were 1,235, an increase of more than 33%.

And while police said they did take the driver of the stolen SUV into custody this time, CPD data shows only 6% of carjackings reported this year have seen an arrest.

"They kids willing to lose their lives over material things, just to joyride," Mitchell opined. "They could have killed me. And your life is gone just as well as mine. But you want to joyride."

Chicago police said only one person was in the car that crashed into Mitchell, but Mitchell said there were other people in that car who got away.