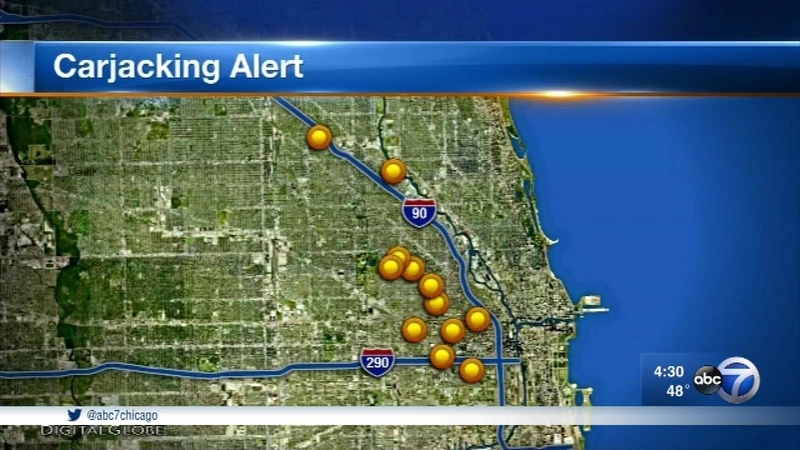 CHICAGO (WLS) -- A carjacking in the city's West Town neighborhood Monday night is the latest in a rash of more than a dozen carjackings in the last couple days.

Davontae Jones, 18, and Jason Dortch, 19, were charged with one count each of aggravated vehicular hijacking - armed with a firearm, a felony, after a Jeep was stolen at about 9:30 p.m. from the 800-block of North Racine Avenue.

Police said after a brief police chase on the Eisenhower Expressway, the men crashed near Austin Boulevard in Oak Park. They were arrested after a foot chase with police.

Jones and Dortch are due in bond court Wednesday morning. Police said they believe they may be connected with the rash of carjackings around the city in the past few days.

Before the carjacking, surveillance video captured the men stalking the owner of the white Jeep from a nearby alley. Charges against the men were pending Tuesday night. The victim said he identified one of the offenders to police.

Police believe they are part of a group of at least three, responsible for at least a handful of at least a dozen carjackings and robberies on the West and Northwest Side over the last couple of days.

There have been over 700 carjackings so far this year.

Police arrested two carjacking suspects Monday night in Oak Park after a chase from the city to the west suburb.

As the city grapples with a spike in carjackings compared to last year, Chicago police Supt. Eddie Johnson said many of the offenders are juveniles, most of whom, are charged with a misdemeanor and quickly released.

"Juvenile justice is a complex issue. We recognize that their minds are not fully developed, but at the same time, there has to be a consequence for those actions," Johnson said.

The subject is something Chicago police plan to discuss in an upcoming meeting with Cook County State's Attorney Kimberly Foxx.

In addition, police are targeting specific high schools where they believe some of the suspects attend.

"The issue isn't so much arresting them, but holding them accountable," Johnson said.

One of those carjackings was caught on surveillance camera, at a gas station at West Division and North Halsted streets in Chicago's Goose Island neighborhood.

The video shows the thief walked up and climbed into a running car while the driver was on the other side, pumping gas. The suspect put the vehicle in drive and took off. The victim tried to run after him, with no luck.

After the carjackings, the vehicles were used in crimes in Chicago and Cicero.