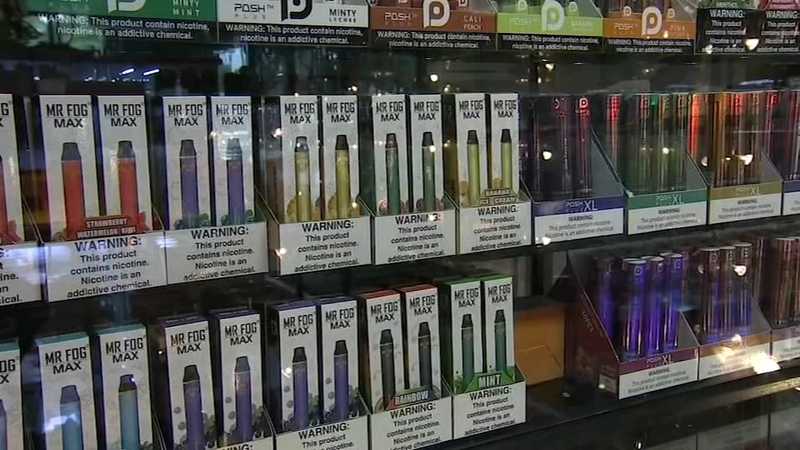 CHICAGO (WLS) -- The Chicago City Council voted Wednesday to ban the sale of flavored vaping products in the city.

"Please don't hide behind vaping is a cessation; they're targeting our children, and it will cost lives," 19th Ward Alderman Matt O'Shea said.

"With flavors like candy and chocolate, these products are designed to entice youth, and we as a City have a responsibility to do everything we can to prevent that from happening," Lightfoot said in a statement. "This ordinance is an important step, but more must be done to protect our young people's health from vaping and the tobacco industry's efforts to have them to develop life-threatening habits."

The ordinance specifically targets the taste or aroma of things like menthol, mint, wintergreen, chocolate, vanilla, cocoa, candy or dessert.

"I congratulate the City Council for addressing flavors comprehensively in this vape-focused ordinance, rather than carving out specific flavors," Chicago Department of Public Health Commissioner Dr. Allison Arwady said. "And I look forward to seeing this body take this same comprehensive approach to flavors in the future, as together we address combustible products and work to improve the health and life expectancy of all Chicagoans."

The Chicago City Council voted Wednesday to ban the sale of flavored vaping products in the city.

Some opponents said the city can't afford to lose any revenue and people can cross over the border to buy them.

"At a time when we're looking at anywhere between a $1.2 and 1.5 billion deficit, we should be doing everything we can to keep as much revenue in the city of Chicago," 41st Ward Alderman Anthony Napolitano said.

But other alderman disagreed.

"We should not trade off the health of young people for the budget," 48th Ward Alderman Harry Osterman said.

"An ounce of prevention can be a pound of cure later on," 16th Ward Alderman Stephanie Coleman said.

New numbers from the CDC show widespread use of tobacco products in middle and high schools in the US.

Business owners said bans like this should only be done statewide.

"As a business owner from between borders, Chicago, between suburbs, it's really unfair if people can go down the street, just grab them from two blocks down, and they can't have them over here in their neighborhood," said Shayef Abdulla, co-owner of Hookah Kings.

The ban does not address flavored tobacco products, and the decision is being called unfair and hypocritical. There had been discussion about also banning menthol cigarettes and e-cigarettes, and the city is still pursuing that.

Lightfoot said her father was a long-time smoker and suffered the effects. She acknowledged some compromises were necessary.

"The tobacco industry is looking for his next generation of people who are addicted to nicotine, and we as a city have a responsibility to do everything that we can to keep that from happening," Lightfoot said after the council meeting.

The mayor said the city will continue to look at expanding the ban on the sale of other flavored tobacco products.

Morrison said in a statement, '"In every form, tobacco products are dangerous to human health and can lead to serious, life-long health consequences. Children are being enticed by the creation of sugary flavors, which threatens the progress we have made over the last several decades to reduce tobacco usage among young people. I applaud the Chicago City Council for its decision to ban these products. I urge my colleagues in the General Assembly to take note and to prioritize the passage of a statewide ban during the upcoming legislative session."

Last fall Morrison filed a measure that would prohibit the sale of all flavored tobacco products, including cigarettes, e-cigarettes and chewing tobacco, her office said.