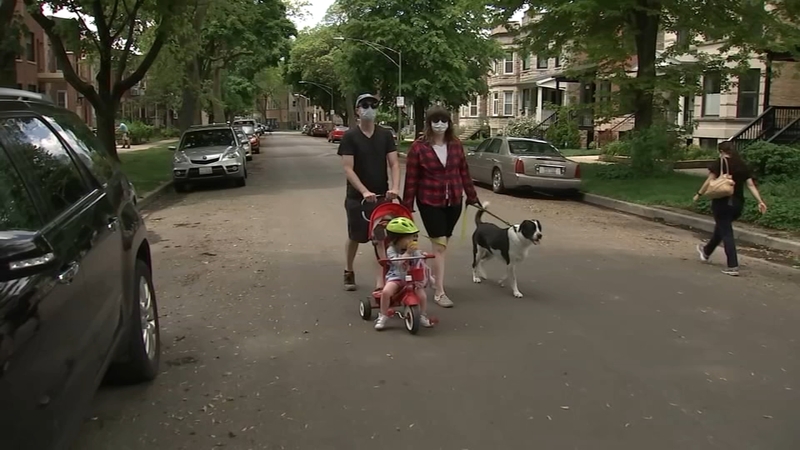 Lincoln Square street is Chicago's first to be shared with pedestrians

CHICAGO (WLS) -- Mayor Lori Lightfoot officially announced a shared streets plan for Chicago, revealing the city will close down some streets in order to make more room for pedestrians and cyclists.

It comes one day after Lightfoot announced the city would be moving into Phase 3 of reopening on June 3.

Leland Avenue in Lincoln Square is the first of many streets in the city to be shared with pedestrians.

With a toddler and dog in tow, Alex and Maggie Galambos said it's hard to socially distance on the crowded sidewalks. That's why the Lincoln Square family and other residents support the city's new plan to partially close Leland Avenue.

"We try to get outside as much as possible and this makes it a little easier," Maggie Galambos said.

"Giving people that extra space is a good thing, I hope they do it throughout the city," Lincoln Square resident Howard Becker added.

Calling it "Our Streets" plan, Mayor Lightfoot said several streets throughout the city will be shared with pedestrians by allowing local traffic only. The other part of the plan includes relief for many neighborhood restaurants that do not have outdoor space, which is necessary under the Phase 3 reopening plan.

"What this means is that in the coming week, six pilot roads will be closed," Lightfoot said. "And our restaurants will be allowed to move tables and chairs into the streets and parking lots to accommodate guests."

The six pilot streets included in the program are:


"Our hope is that the city can continue to explore and create dining options throughout our 77 communities," said Sam Toia, Illinois Restaurant Association. "Today is not a solution for every restaurant in Chicago, but it is another pragmatic and crucial step for our path to recovery."

The Illinois Restaurant Association said restaurant sales are down by 80 percent and half of the city's 171,000 food service employees are laid off.

After the initial pilots have launched, the city will evaluate the potential to expand programming to other areas in the city. Beginning Monday, chambers of commerce, SSAs, business associations and restaurants in groups of three or more can visit the city website, Chicago.gov, to submit an application for expanded outdoor dining. This will allow for existing, fully-licensed retail food establishments to temporarily use streets or private property for outdoor dining and drinking until 11 p.m. However, the city's 9 p.m. liquor sales curfew remains in effect at all retail establishments. More information on the application process and supporting documents will be made available on the website, and the city will be hosting multiple informational sessions with potential applicants in the coming days.