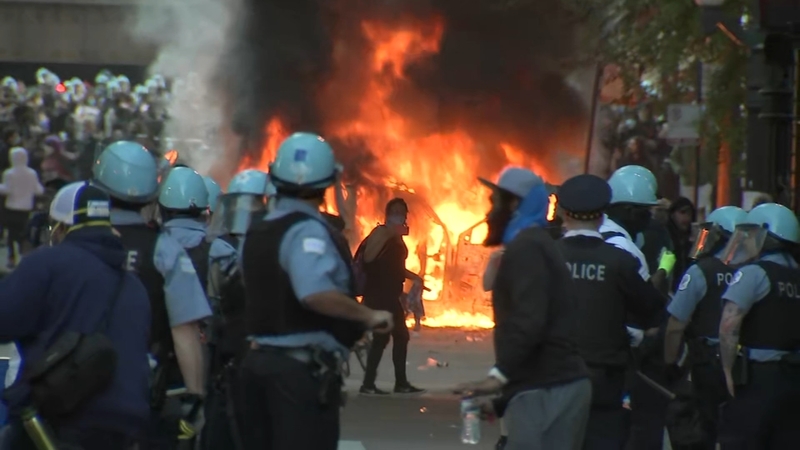 CHICAGO (WLS) -- The federal monitor picked to oversee a court-mandated reform of the Chicago Police Department issued a report that said the city was not properly prepared for last summer's unrest following the murder of George Floyd.

"In short, the City, like many other cities, was unprepared for the level of sustained protests and unrest downtown and throughout its neighborhoods," the report said.

The report was based on interviews and public testimony.

"The City and CPD must take immediate, deliberate, and transparent efforts-in compliance with the Consent Decree-to better protect, serve, and be accountable to the people of Chicago and all communities," said independent monitor Maggie Hickey.

Hickey said the city's officers were not trained properly and did not have adequate rest to deal with the days long unrest.

Mayor Lightfoot said the department, like many others across the country was prepared for a large protest but not for the larger violence that erupted.

CPD released the following statement in response to the report.

"The Chicago Police Department is committed to safeguarding public safety, while also prioritizing the fairness, equity and respect of all individuals. We have reviewed the Independent Monitoring Team's (IMT) report and recommendations on the Department's response to last year's civil unrest. The Department had already proactively identified many of these areas for improvement during an after-action review that was conducted in June 2020. The results of the after-action review have since informed the Department on how to improve its large-scale emergency response. This includes changes that will be or have already been implemented in areas like operational planning, intelligence gathering, community engagement, training, accountability and officer wellness. Since June 2020, we have also conducted numerous table-top exercises to test the Department's response to various scenarios based on the improvements that resulted from the after-action review. We will continue to review procedures and strategies used in these large-scale responses to ensure accountability at every level of the Department."
Report a correction or typo
Related topics:
chicagochicagoprotestlori lightfootgeorge floydpolice officerchicago police department
Copyright © 2022 WLS-TV. All Rights Reserved.
CHICAGO POLICE DEPARTMENT
Mayor Lightfoot to address downtown violence, Millennium Park curfew
Calls for cooling ordinance grow after 3 found dead in Rogers Park
33 shot, 5 fatally, in weekend violence, Chicago police say
Tenants call for action after 3 found dead in North Side building
TOP STORIES
Mayor Lightfoot to address downtown violence, Millennium Park curfew
33 shot, 5 fatally, in weekend violence, Chicago police say
Boy, 14, killed in north suburban shooting, police say
Alleged Buffalo shooter's prior threat, hospital stay face scrutiny
Shooter fired 50 rounds in Buffalo supermarket attack: Police
McDonald's leaving Russia altogether amid Russia-Ukraine war
Arby's manager urinated in milkshakes for sexual gratification: police
Show More
Calls for cooling ordinance grow after 3 found dead in Rogers Park
Evanston HS reinstates indoor mask mandate
Lunar eclipse during Super Flower Blood Moon appears in Chicago sky
Police release names of victims killed in mass shooting at supermarket
'American Idol' contestant from Illinois makes it to Top 5
More TOP STORIES News