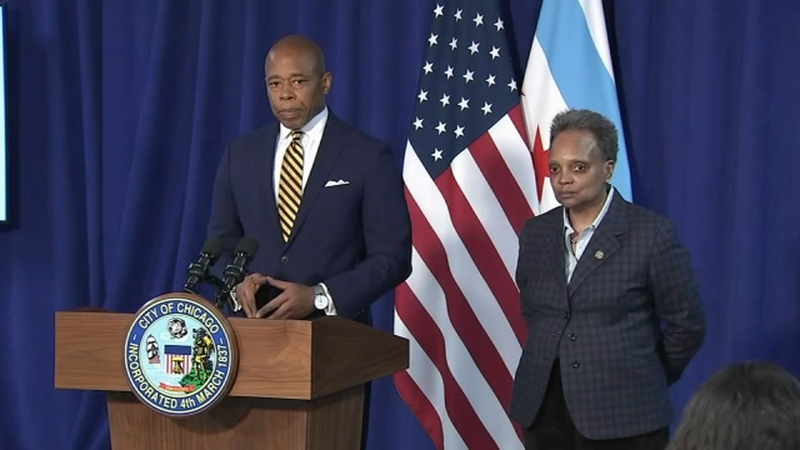 Adams visited Chicago for a series of stops, including a fundraiser.

During the meeting, the two leaders shared ideas for ways to combat the shared problem of violent crime.

Lightfoot was back at city hall Friday after her fundraising trip to Miami.

The two big-city bosses talked behind closed doors for about 40 minutes, with crime as a shared concern heading into the summer.

"What I enjoyed the most about the conversation that the two of us shared is, how we both focus on not only the immediate action -- we must do to keep our streets safe -- but it's intervention and prevention," Adams said.

"We've got to make sure that we hold violence, dangerous people accountable -- on that, we both agree. But we also, as the mayor said, and I think very eloquently, stopping this river of violence," Lightfoot added.

While Chicago's population is just one-third of New York's, its crime problem is worse.

Statistics show, so far this year, New York has seen 76 murders compared to 104 in Chicago. Based on population, Chicago's murder rate is four times higher.

Shootings, so far, paint an even bleaker comparison. New York has seen 217 shootings incidents, compared to 396 making the rate in Chicago five times that of the Big Apple.

Adams said he has some takeaways from the meeting that he plans to implement on a larger scale in New York.

"How the mayor is going on the ground, doing the local town halls to speak with grassroots communities and organizers. It's so important to do so," Adams said.

He said he and Lightfoot are the right mayors for this time.

The two did not talk about police reform, but share the same focus on rebuilding community trust.

"I think we both recognize that you build trust by being present and engaging and listening to the community," Lightfoot said.