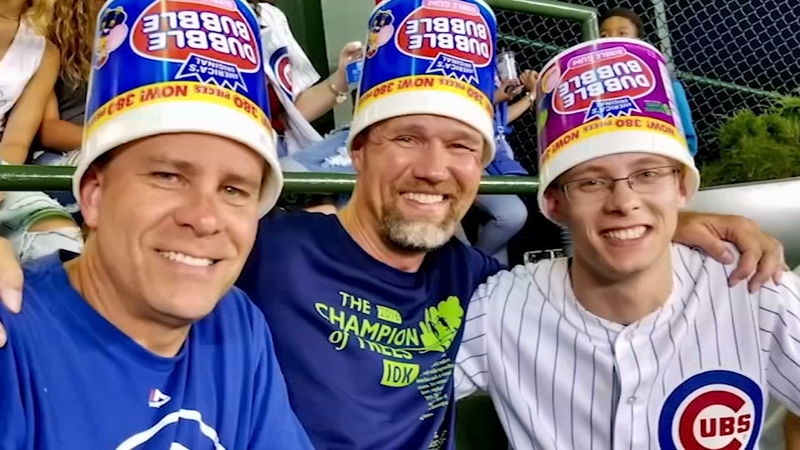 CHICAGO (WLS) -- The Cubs fan who was injured by a falling debris from Wrigley Field's famed scoreboard told ABC7 Eyewitness News he believes if he hadn't been wearing a plastic bucket on his head at the time, he would have been seriously injured.

Kyle McAleer was struck by a piece of debris from the scoreboard at about 8:50 p.m. on July 26, as the Cubs played the Arizona Diamondbacks. He was taken to Illinois Masonic Hospital with a cut to his head that required several staples.

Kyle, who is from Iowa, said he eats, sleeps and drinks Chicago sports. So when former Cubs player Starlin Castro wore a bucket on his head after the team won a game a few years ago, he was inspired to do the same. He got rally buckets for himself, his uncle and his father.

"We are generally the only people at the ball game with the buckets," said Scott McAleer, Kyle's father, with a laugh.

The McAleers had their buckets with them when they traveled from their hometown in Iowa to Wrigley Field to celebrate Kyle's 20th birthday. They Cubs were not doing well against the Diamondbacks.

"They gave up three runs and I said, 'Alright, we're putting them on,'" Kyle said.

That decision may have saved his life, because soon after he heard a loud thud and felt the bucket get pushed down over his face.

"My ears were ringing and I felt some pain, but I wasn't sure what it was," he recalled. "As soon as I take the bucket off to look down and find my glasses, the blood comes running out of my head."

Kyle was hit by a 6 x 8 inch metal pin that holds score tiles in place on the old scoreboard. He suffered a two inch laceration above his hairline and needed five staples. But his dad said the bucket prevented the injury from being worse.

"First it pushed it down before it punched through the plastic, so there's no doubt that it provided some form of cushion," Scott said.

Kyle is back in Iowa and feeling better. He said he also thinks about what could have happened if things had gone differently.

"If the Cubs weren't losing, I would not be wearing that bucket and who knows where I'd be today," he said.

That bucket is now cracked and stained with blood, but he's keeping it.

Kyle said Cubs security responded right away, and helped him get to the hospital. The team presented him with gifts, including a game ball signed by Javy Baez and a new Addison Russell jersey.