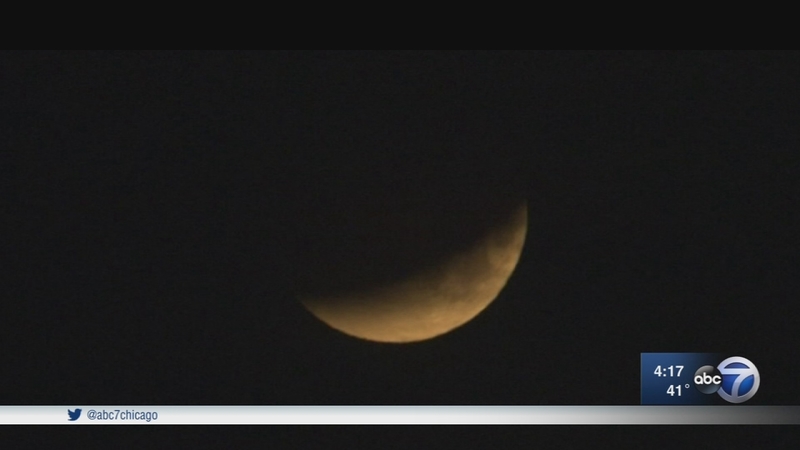 People all over the world camped out early to get a glimpse. More than 100 people gathered on top of a hill at the Greene Valley Forest Preserve Thursday morning on the highest public spot in DuPage County to get a look at a rare lunar event that hasn't been seen in the U.S. since 1886.

A timelapse of the Super Blue Blood Moon.

"An event once in 150 years it's definitely worth waking up at 5 and making it to the top of this hill," Kundu said.

Even though clouds blocked a large part of the eclipse, ABC7 couldn't find a single person who regretted coming out. Many were armed with cameras, binoculars and telescopes.

"It's always worth it. There's always neat things to see in the sky and this is one of them," said Rick Gering of the Naperville Astronomical Association.

Why all the hype? There were actually four things happening at once.

"It's what I've been calling a quad-fecta," said Eric Claeys of the Naperville Astronomical Association.

A super moon means the moon was closer to the Earth than usual, a blue moon means it was the second full moon of the month and it was a blood moon.

Take a look at some of the photos and videos from the eclipse of the supermoon on Jan. 31, which was also a blue moon.

"In the red color we saw earlier, you're seeing the reflection of all the sunrises and sunsets happening on Earth at that moment, and I think that's neat," Gering said.

The fourth thing is an optical illusion called a selenelion Stargazers could actually see the eclipsed moon and the sunrise at the exact same time.

"And that's because the Earth's atmosphere will bend the light from the moon," Claeys said.
EMBED More News Videos

Back in the city, another group of moon watchers also gathered outside the Adler Planetarium.

"It's only one time in 150 years, so I don't want to miss it," said moon watcher Roddolf Gonzalez.