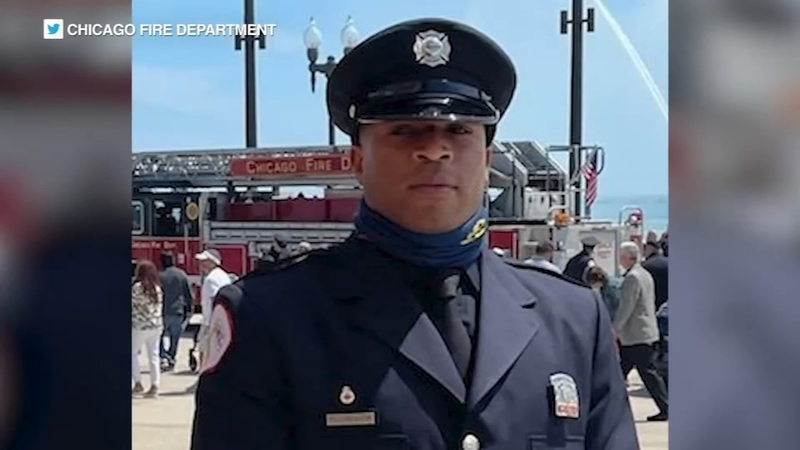 CHICAGO (WLS) -- A Chicago firefighter has died of the injuries he sustained while battling a fire on the Northwest Side last week.

The fire department identified him as 30-year-old Mashawn Plummer, and said he was also an EMT.

It is my sad duty to report the passing of Chicago Firefighter/EMT Mashawn Plummer of Engine 94 who was inured in a fire on Mamora. He joined CFD in December of last year he is 30 years old. (Langford) pic.twitter.com/woqHE7TNa7

Plummer is survived by his mother, father and four sisters.

Dozens of firefighters, family and friends lined the streets to honor Plummer during the procession from Loyola University Medical Center to the Cook County Medical Examiner's Office.

"I loved this," said Shirley Simmons, a friend. "He got his honor. He got his special treatment. I'm quite sure the family is very, very proud."

One person died in the blaze in the 3100-block of North Marmora Avenue in Belmont Central, and two others were injured.

The fire broke out just after 2 a.m. in the basement of a two-story apartment building next to St. Ferdinand Church last Thursday.

Plummer had just celebrated his first anniversary with the Chicago Fire Department, was first taken to Community First Hospital and then transferred to Loyola University Medical Center in Maywood where he could be treated in their specialized severe burn unit.

He was listed in critical to very critical condition for the duration of his hospitalization. The fire department confirmed he died Monday afternoon.

Lifelong neighbors of Plummer and his family, Simmons said the ceremony honored a one of a kind man.

"He was just, like, the kid on the block that likes to do things for people. Mashawn would give you the shirt off his back," she said.

My prayers are with the family of Mashawn Plummer and his colleagues at the Chicago Fire Department. He died trying to save the lives of others, and we honor his service. https://t.co/m2ZnZVlZr7

Mashawn Plummer was one of our state's most courageous public servants. We live in a safer world because of his unwavering, unselfish sense of responsibility - he was taken from us far too young.

MK and I send our thoughts to his family and the entire @CFDMedia community. pic.twitter.com/lJvndxqIjn

A prayer vigil will be held Wednesday at 7:50 a.m. at Engine 94 in Portage Park, where Plummer was assigned.

It is my sad duty to report the passing of Chicago Firefighter/EMT Mashawn Plummer of Engine 94 who was inured in a fire on Mamora. He joined CFD in December of last year he is 30 years old. (Langford) pic.twitter.com/woqHE7TNa7