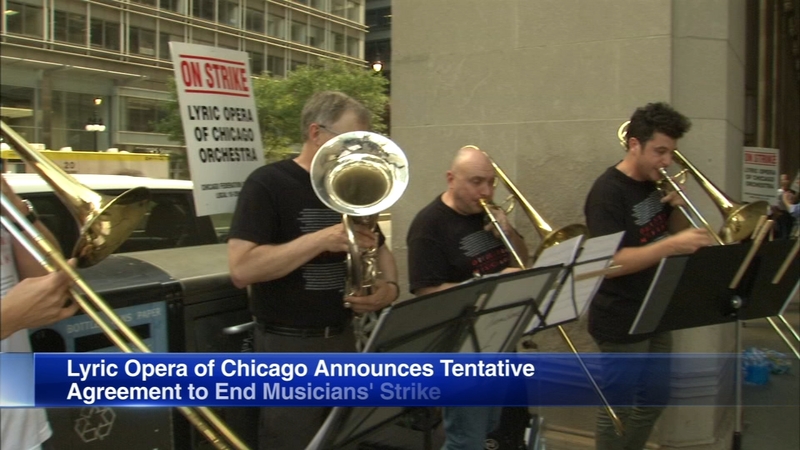 CHICAGO (WLS) -- The Lyric Opera of Chicago and the union representing its orchestra musicians have reached a contract agreement, just days after the musicians went on strike. The musicians ratified the deal Sunday evening, according to a statement.

In a tweet late Saturday, the Lyric Opera said that they and the Chicago Federation of Musicians Local #10-208 (CFM) had reached a labor agreement that extended through the 2020/2021 season.

They add that the "concessions are mitigated by more favorable terms we were able to obtain."

-- A 5.6 percent increase in weekly salary over the 3-year contract term.

-- The 2019-20 season now includes a guarantee of five (5) additional weeks for the "Ring" cycle, outside of the 22-week main opera season.
-- The orchestra size will be reduced by four instead of five musicians, delayed until the 2019-20 season.
-- The Spring musical is now guaranteed to employ 37 members of the Orchestra, and the salary for the musicals increases significantly (by 6.6%).
-- There are new guarantees regarding the hiring of Orchestra musicians for Joffrey Ballet productions beginning in 2020.
-- Health care benefits are maintained as is; family leave is now 8 paid weeks; and there are numerous other improvements in working conditions.

We look forward to welcoming audiences back to Lyric as performances resume this week.

The musicians' union contract ran out in June and leaders had said they have been negotiating since with little progress before musicians took to the picket line on Tuesday.

Musicians protested proposed cuts, which they said would have diminished the orchestra. In a statement earlier this week, the union said that cuts included the elimination of five positions, 8 percent pay cut, reducing the number of performances and working weeks from 24 to 22, and eliminating all of Lyric's popular radio broadcasts.