WLS
By John Garcia, Will Jones and Cate Cauguiran 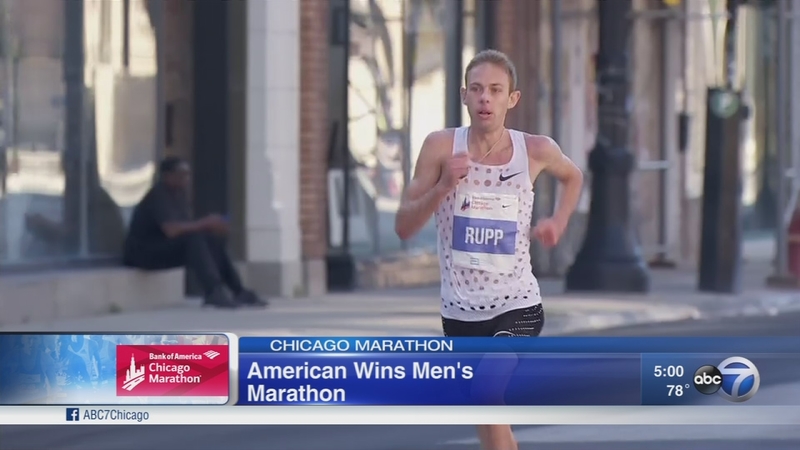 CHICAGO (WLS) -- An American won the men's Chicago Marathon for the first time since 2002 on Sunday.

The last American to win the men's race was Khalid Khannouchi in 2002.

Congratulations to Galen Rupp, male winner of the 2017 #ChicagoMarathon, with an official time of 2:09:20! pic.twitter.com/aMjRlwOgYx

Congratulations to Tirunesh Dibaba, female winner of the 2017 #ChicagoMarathon, with an official time of 2:18:31! pic.twitter.com/r0CnMP03xI

More than 40,000 runners started the race, with more than 400 runners from Puerto Rico among them. They ran in support of the battered island, some wearing Puerto Rican flags. Chicago Mayor Rahm Emanuel's son Zach ran the marathon to raise funds for Puerto Rico. Emanuel tweeted a video cheering on his son.

Nearly two million people were expected to watch the marathon to cheer on the runners.

The marathon started in Grant Park before traveling through 29 neighborhoods, first heading north and snaking around the west of the city, down to 35th Street and then back up to Grant Park.

The wheelchair race started at 7:20 a.m., then athletes with disabilities at 7:23 a.m., and the first of three waves of runners beginning at 7:30 a.m. The course is open for 6 and a half hours, that is roughly fifteen minutes per mile.

A formerly quadriplegic man was determined to finish the Chicago Marathon course Sunday, walking over 15 hours to reach his goal.

A formerly quadriplegic man was determined to finish the Chicago Marathon course Sunday, walking over 15 hours to reach his goal.

Alan Robinson still had a smile on his face as he neared his 15th hour of walking the Chicago Marathon course. Sunday was Robinson's 20th marathon, all of them since a car accident caused a spine injury that left him quadriplegic.

"I was paralyzed from the neck down...not supposed to be able to stand up," said Robinson.

Robinson said a combination of hard work at the rehab center and the power of prayer allowed him to walk, even run.

While most of the other runners were dealing with the midday heat during the marathon, Robinson was just getting started. While Galen Rupp crossed the finish line, Robinson was on his third mile.

"As long as you're doing something positive, something God intended you to do...instead of staying home and blaming this and that," Robinson said.

Robinson had a crew of supporters with him on the route, and while the aid stations from the course were long gone, friends had food and water to keep him going.

"After I heard his story...no way I could say no," said Tonya Howell, a member of the crew.

Howell and others were in it for the long haul, all the way to the finish line.

Due to a heart condition, the 2017 Chicago Marathon was Robinson's last marathon.

Chicago police worked with federal and local agencies Sunday to keep tens of thousands of runners and spectators safe for the Chicago Marathon.

Chicago police worked with federal and local agencies Sunday to keep tens of thousands of runners and spectators safe for the Chicago Marathon.

After the attack in Las Vegas, security was a major concern for marathon organizers and law enforcement officials. More officers were put on guard along the marathon route and in public transportation.

Monday will be another busy day for Chicago police with the 65th Annual Columbus Day parade marching down State Street and the Cubs facing off against the Nationals at Wrigley in Game 3 of the NLDS. The Chicago Bears will also be taking on the Vikings at Soldier Field.

The Chicago Police Department said they plan to put officers in uniform and in plain clothes on patrol.

Robert Pape, director for the University of Chicago Project on Security and Threats, said authorities have been taking the right steps to improve security at events that draw large crowds throughout the city.