Security stepped up as Chicago rings in New Year with fireworks at Navy Pier, Chicago River 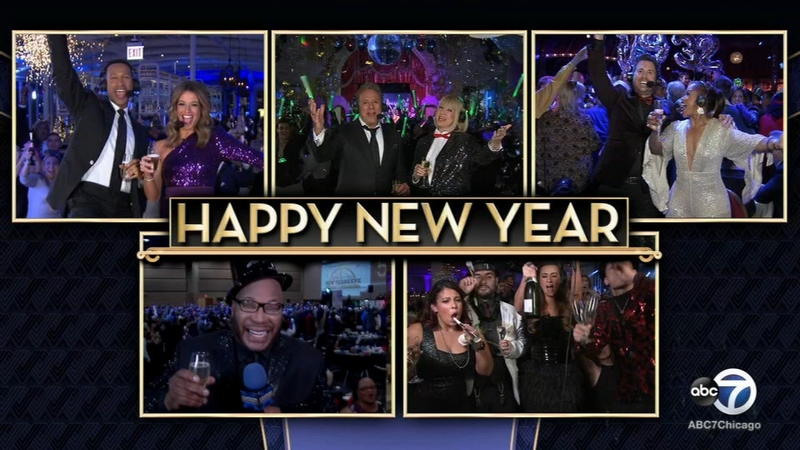 CHICAGO (WLS) -- Security measures were in place to keep Chicagoans safe this New Year's Eve, with events and fireworks at Navy Pier and along the Chicago River.

Navy Pier also said goodbye to 2019 with its annual fireworks display at midnight.

Staffing increased along with several layers of police and private security for the celebration.

"Upon arrival at the entrance point to Navy Pier there will be a security checkpoint at which there will be bag checking and wanding so prepare for an inspection," Payal said.

At Navy Pier, a youth escort policy was in place, so anyone 18 or under needed to be accompanied by an adult.

The Chicago Police Department says it deployed an additional 1,300 officers to the streets for Tuesday's festivities.

Officers were on foot, bicycle and horses. Canine units were positioned at CTA stations around the city.

Many of the specialized units will be part of a team of 300 additional officers that will be deployed specifically for the fireworks display planned for the Chicago River from Wolf Point near the Franklin/Orleans Bridge to east of Columbus Drive. A separate fireworks display at Navy Pier will also have extra officers dedicated to it.

The Chicago Riverwalk will closed at 10 p.m. Tuesday and no fireworks viewing will be allowed on the Riverwalk.

Officials encourage anyone who sees something suspicious or unsafe to call 911 without hesitation.

"The City of Chicago has worked with organizers of the Chicago River and Navy Pier Fireworks to ensure a safe and enjoyable experience for residents and spectators," said OEMC Executive Director Rich Guidice. "As always, we will work with our public safety partners to monitor conditions across the city, and make adjustments if necessary."

For parents who wanted to ring in the New Year but knew they won't make it to midnight, there were several parties where families could celebrate together in style.

There was a countdown to noon celebration and bubble bash at the DuPage Children's Museum in Naperville.

"It has become a tradition in our family because this is really a wholesome place to be. It's so much fun," said Carolyn Collins, who attended the event with her daughter and grandson, Edison.

The kid-friendly event is in its 18th year and features hands-on exhibits, special activities, live musical performances, and more.

And just like last year, Brookfield Zoo will ring in 2020 with its Zoo Year's Eve celebration. A DJ will set the party tone with fun and games before a confetti countdown welcomes in the New Year.

Hothouse in Edgewater will hold a matinee New Year's "Peace Concert" at 3 p.m. and at 8 p.m., Time Out Market Chicago will host its inaugural New Year's Eve bash. Lincoln Park Zoo will put together a "Zoo New Year's Eve" event from 9 p.m. until 1 a.m.

And don't forget to tune in to Countdown Chicago. It's an ABC7 New Year's Eve tradition that takes you inside the biggest parties across the city and the suburbs. The fun begins at 11:08 p.m.

CTA and Metra are both offering free rides to help you get home safe after your New Year's Eve celebrations.

For the first time in its history, Metra is giving free rides after 6 p.m. Tuesday night. This applies to every train that arrives or leaves downtown Chicago.

Regardless of where you're celebrating, Illinois State Police say they're on the lookout for drunk drivers.

Meanwhile, the New Year will bring recreational marijuana sales to Illinois. Dispensaries are now making sure they have plenty of supply on hand and they're ready for lots of customers.