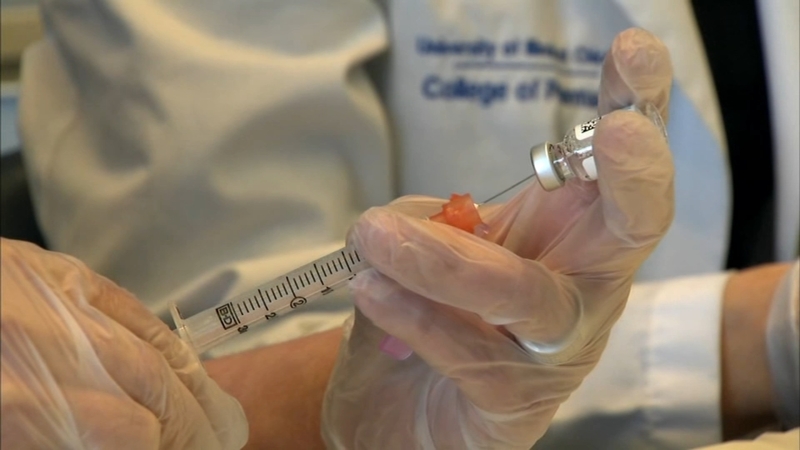 CHICAGO (WLS) -- The Fraternal Order of Police has launched a fundraising effort to help officers who have been put on no-pay status for defying the mayor's vaccine reporting mandate as more city workers join the pushback against it.

"The mayor's mandate is more overreaching than any of the others," said Robert Tebbens captain and EMT with 27 years in the Chicago Fire Department.

Tebbens is one of more than 100 firefighters and other city workers suing Mayor Lori Lightfoot and Governor JB Pritzker over the vaccine mandate.

"We have a lot of our members that are vaccinated, but are supporting the unvaccinated based on their right to choose what they do, medically with their own bodies," he said.

Only a handful of firefighters have been put on no-pay status for refusing to report to the city portal whether they are vaccinated or not. The resistance a bit stronger in the police department.

The Fraternal Order of Police tweeted it is now up to 23 officers who have been stripped and sent home without pay. The FOP asked fellow officers to contribute money through a fundraising page. So far contributions have topped $36,000.

"They want to make heroes out these officers who have stepped up and they want them to set an example and encourage others to do so," said Laura Washington, ABC7 Political Analyst

Tebbens said firefighters already have enough stress in their lives. The vaccine mandate is pushing some people to the brink.

The mayor insists the vaccine requirement is to protect city workers and the people they serve.

"I think the mayor by nature is very combative and so are the unions, and so they are going to continue to be at loggerheads on issues as we go forward," Washington said.