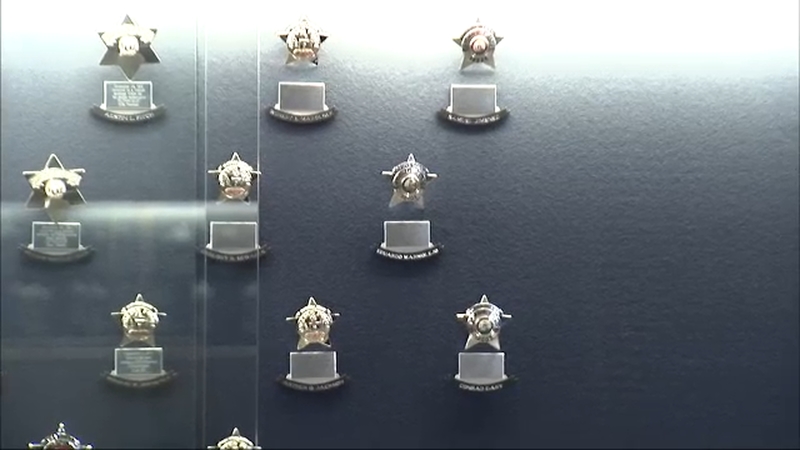 Officer Jimenez was killed in a shooting at Mercy Hospital last November. Officers Gary and Marmolejo were killed last December after being fatally struck by a commuter train while pursuing a man after shots were fired in the Rosemoor neighborhood.

"These are men and women who made the ultimate sacrifice and deserve to be memorialized," CPD Superintendent Eddie Johnson said.

The families of three fallen @Chicago_Police officers are escorted in for the Stars Ceremony to enshrine Officers Samuel Jimenez, Edwardo Marmolejo, and Conrad Gary. @ABC7Chicago Their stars will be retired this morning. pic.twitter.com/myIXBR9Ro1

The families of the three fallen officers were escorted into the hall to salutes honoring their loved ones' service and sacrifice.

"(He was) just a phenomenal human being. Phenomenal," Officer Miguel Guerrero said of his late partner, Officer Jimenez. "Coming to work every day... it's still tough. I'm glad I got to ride next to him and learn a lot. I'm a lot better of a person."

Officer Gary's wife Kelly took her daughter up with her to pin Gary's star to the wall.

"There's going to be no one else like him," Officer Marmolejo's 16-year-old daughter Rebeca said of her dad. "There's not going to be anyone else on this earth that's going to live the way that he did."

All three officers are now permanently enshrined, a memorial to those who serve and protect our city.

"We will never be able to repay the ultimate sacrifice that they made, but we will always honor it," Mayor Lori Lightfoot said at the ceremony.

"We owe all the families of those left in the wake of such tragedy a debt that we can never repay," Johnson said. "These officers died as heroes, putting the lives of others ahead of their own."