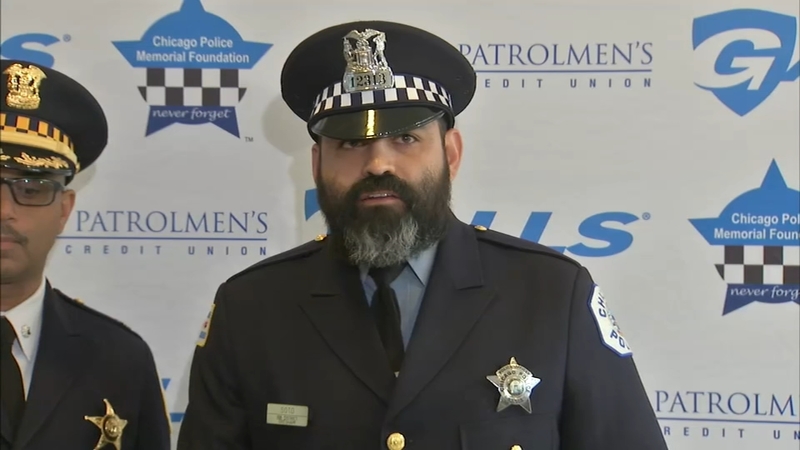 CHICAGO (WLS) -- A Chicago police officer who is alive thanks to his bulletproof vest was honored for his bravery by the Chicago Police Memorial Foundation Tuesday morning.

As the city of Chicago and its police department mourned the loss of one its own, Officer Fernando Soto, took a bullet in the line of duty.

The day after the tragic Mercy Hospital shooting last month, Soto was patrolling near 87th and Paulina streets when Soto noticed someone acting suspicious.

"On that morning, Officer Soto saw a man walking down the street making movements that were consistent with a man concealing a gun," said Phil Cline, executive director of the Chicago Police Memorial Foundation.

When Soto and his partner tried to stop and question the individual, police say the man started firing at Soto. Then Soto fired back, but was hit. Thankfully, the bullet lodged itself inside the bulletproof vest he was wearing.

The vest was given to him as part of the "Get Behind the Vest" campaign by the Chicago Police Memorial Foundation, which honored him Tuesday.

"They saw the need for it and stepped forward and has provided me and fellow officers in the district with the vest and the ability to actually go out there and feel a little safer and protect the streets and city," Officer Soto said.

"This is the first of the new vests that have stopped a bullet and saved a police officer," Cline said. "Fernando has two kids at home. He wanted to go home to them and that vest allowed him to do that."

Soto ended up bruised, but no injuries beyond that, something he does not take for granted, especially when the outcome could have been far worse.

"It takes a special person to be a police officer. We go out and we don't think about potential consequences of what could happen when we go out in the car, we just go answer the call," said Chicago Police Commander Bill Bradley.