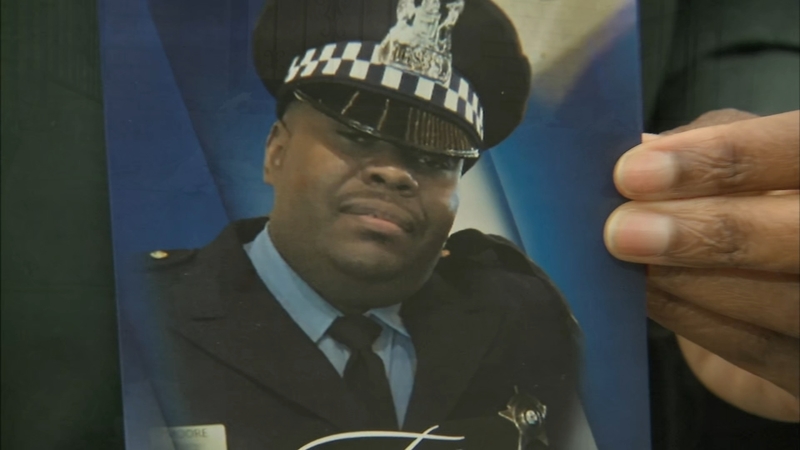 The 46-year-old Chicago police officer died on November 24 from the coronavirus along with contributing factors, according to the medical examiner's office.

During his 14-year career, Titus Moore worked in both the Calumet and Grand Crossing Districts.
RELATED: Chicago police officer remembered for loving job, caring for others

79th Street was bathed in blue lights as member of the Chicago police department filed into the funeral.

To practice social distancing, only family was allowed inside to the private ceremony held at Leak & Sons Funeral Home.

Department members who wish to pay their respects to Moore and his family have been asked to remain in their vehicles and process to the ceremony.

It's been quite the perfect storm, if you will, and yet police officers are on the job responding to calls, doing the best they can in protecting themselves and their families,: said CPD Supt. David Brown.

In November he was found unresponsive in his South Side home where he was pronounced dead. Moore contracted the coronavirus about two weeks before he died, but his father said it appeared his condition was improving.

"Most people didn't get to know him really well because he's quiet and reserved," said his sister Thea Moore.

RELATED: Off-duty Chicago cop found dead in his South Side home
"I can't imagine him not being there," said his cousin, Ramya Herman. "He was one of those people who, if you needed him he was already on his way. It's going to be very interesting having someone you grew up depended on no longer there."

"He was a real good policeman," said Moore's father, Theopsy Moore, a retired CPD officer. "He cared about people. He cared about his job."

"He was a gentle giant. He was just loving," Green added.
Moore received more than 70 Department awards, according to the department, including three Department Commendations, the Superintendent's Award of Valor, 50 Honorable Mentions, five Complimentary Letters, five Attendance Awards, Police Officer of the Month Award and a Life Saving Award.

Moore is survived by his two sisters and his father, a retired CPD officer.

"He wanted to be that positive image of a Black man, a police officer out there in his community doing well, helping others," said his sister.