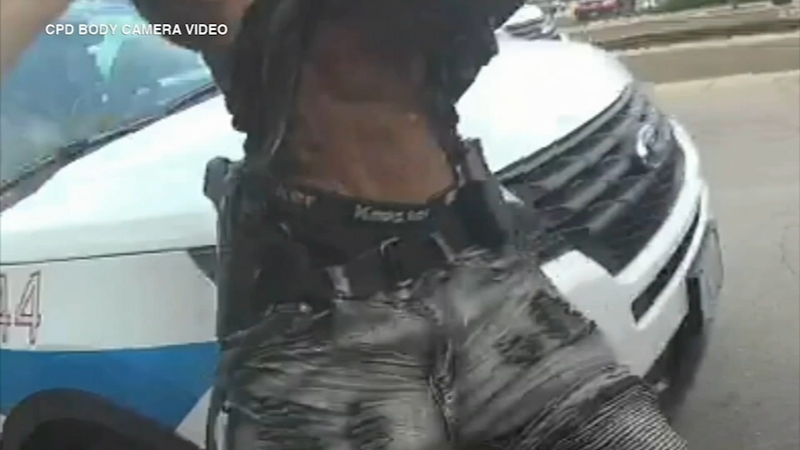 CHICAGO (WLS) -- Hundreds of protesters turned out again Monday, taking over the same block of 71st Street where police shot and killed a man in the South Shore neighborhood on Saturday.

The protests continued after police made the unprecedented decision to release body-camera video of the incident, less than 24 hours after it happened.

It's been two days since 37-year-old Harith Augustus was shot and killed during a confrontation with Chicago police officers. An independent investigation into the shooting is underway, but several groups say they don't trust it.

"I think that Mr. Augustus' constitutional rights were violated," said Maxwell Little, South Shore resident. "To weaponized somebody's blackness is against the law."

Chicago police released body camera video Sunday. Augustus was stopped by police who believed he had a gun.

While the footage appears to corroborate the police department's version of events, there is no audio to determine what led to the confrontation.

"We need to know who the officer was who actually did this and they need to be held accountable," said Maria Hernandez, Black Lives Matter.

Witnesses to the shooting shared another video of the aftermath, in which they saw three officers running from the shooting and getting into a police car. CPD would not confirm how those officers may or may not have been involved.

Police have maintained that they shot Augustus only after he reached for a weapon under his shirt. The bodycam footage of the incident shows at least four officers approach Augustus. A brief struggle ensues after a female officer grabs his arm. He is then shoved with his back to a police vehicle.

At this point, police froze the image to show a holstered pistol and what appears to be an ammunition magazine. The video resume, showing Augustus getting away and walking into the street, where he appears to reach for the weapon. At that point one of the officers discharges their weapon several times, fatally wounding Augustus.

In voicing their suspicions, activists have also pointed to what appears to be Augustus displaying a firearms permit just as the confrontation begins.

"You can see that he has what looks like a wallet in his hand. He was trying to comply and he was shot in the middle of complying. Roughed up and shot," Hernandez said.

Violent protests on Saturday calmed into demonstrations on Sunday.

"We have a right to protest," said Frank Chapman of the Chicago Alliance Against Racism and Political Oppression. "The police do not have a right to come out and brutalize us because we're protesting. And that's been their history, that's what they've been doing."

"We want these things investigated because we know that the police are not clean on these issues, that they have a dirty record," Chapman said.

"The young men in our community aren't safe to walk the streets, and are in danger from police who are supposed to be protecting us," said Roberta Wood, South Shore resident.

The community ended their march at Augustus' barber shop, demanding to know more about his death.

The shooting brought up ongoing issues of distrust between the community and police.

"They are having to patrol a neighborhood that they are not even from," said Kendall Henderson.

Alderman Leslie Hairston (Ward 5) said there is work that needs to be done to address residents frustrated with complaints of police brutality as well as residents concerned about criminal activity.

Longtime South Shore residents called the shooting a tragedy, and are among those working with CPD and residents to increase vigilance against crime.

"We need to have people in the community stand up not just for police shootings but any shooting, it's not going to be tolerated," said Robert Van Puyenproek, Community Police Beat 332 Facilitator.

Little is known about Augustus, other than that he lived alone, worked at a local barber shop and had a 5-year-old daughter.

Meanwhile, the Coalition for a New Chicago is planning an act of civil disobedience in a business district to be named. The time is also being kept secret so they say no one can try to stop the effort. And they're calling on the mayor to resign.

"What I hate to see, everybody, is that if other incidents like this will occur is that we have another Laquan McDonald cover up because Mayor Emanuel wants to win office," said Rev. Gregory Seal Livingston.

A police spokesperson reiterated Monday that while Augustus has a FOID card, he did not have a concealed carry license. CPD said they will not release any further bodycam footage. The Civilian Office of Police Accountability is handling the investigation and released a statement saying that they will not be releasing further video at this time as it could jeopardize their investigation.