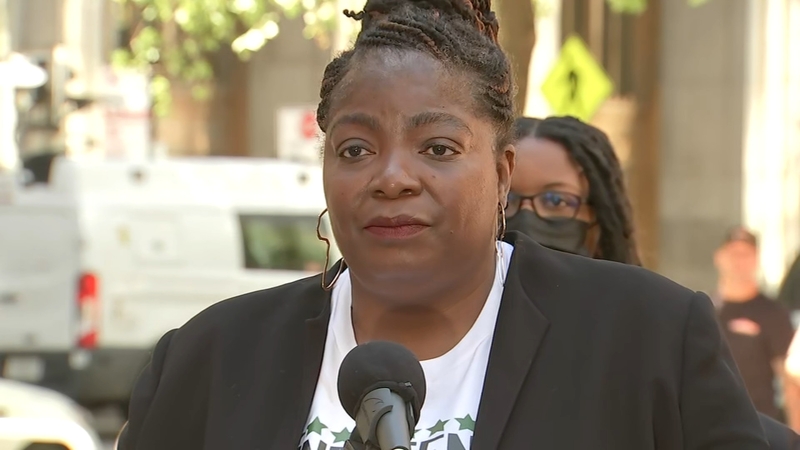 CHICAGO (WLS) -- The woman at the center of a high-profile wrongful raid by Chicago police is now accusing the mayor of breaking a promise.

"I absolutely feel betrayed by the mayor," Anjanette Young said.

Six months after Young personally met with Mayor Lori Lightfoot to accept her apology for the botched police raid on Young's apartment in 2019 , she and her attorney called out Lightfoot and the city law department.

"I stand here, approximately 846 days of living the trauma that was caused to me, by the city, by the Chicago Police Department, and I call it reckless," Young said.

In an April 2020 email provided by Young's attorney, the city rejected Young's blacked-out settlement demand and then counter-offered with zero dollars. Late last month, a mediator got involved in the case.

"We did have a mediation, and you know that the biggest number that they came up with was less than half of the largest settlement they paid out for a very similar case," said Keenan Saulter, Young's attorney.

The city settled that previous case for $2.5 million. Young said when she personally met with the mayor in December to accept her apology, Lightfoot promised to "make her whole."

"And yet here we are almost six months later, and she's threatening to dismiss this case," Young said.

The city's law department issued a statement Wednesday saying "We were hopeful that a robust discussion moderated by an experienced former federal judge would lead to a fair and judicious outcome - one that would have fairly addressed Ms. Young's traumatic experience, but also fair to the taxpayers."

The city adding that after Young's attorney rejected their offer, they were left with no choice but to take the case to court.

"It's been a very challenging time for me. I am often in tears about a lot of things. Very disappointed or disgusted at the mayor," Young said.

Young is also pressing aldermen to pass an ordinance named for her that would put into law restrictions about police raids. But Alderman Chris Taliaferro, who chairs the public safety committee said it will get a hearing, but he does not believe codifying police procedures is the way to handle this.

There is no disagreement that the events which occurred at Ms. Young's home in February 2019 were traumatic for her and the community. No one should have to endure what Ms. Young experienced which is why the City has remained committed to mending the harm done and finding an equitable and expeditious resolution to this matter. We were encouraged when Mr. Saulter finally agreed to Mediation, a Mediation in which the City assumed all costs. We were hopeful that a robust discussion moderated by an experienced former federal judge would lead to a fair and judicious outcome - one that would have fairly addressed Ms. Young's traumatic experience, but also fair to the taxpayers. Mr. Saulter chose to reject the City's offers and walked away from further settlement discussions.

In light of Mr. Saulter's decision, we have no choice but to litigate. We still believe this is a case that should settle, but Mr. Saulter will have to bring a different mindset to the table. Meanwhile, we will carry on, not litigate in the press, and make no further comment.

Response from Attorney Keenan Saulter to today's statement made by the City of Chicago Department of Law:

The city continues to disrespect Ms. Young and her right to counsel by attempting to separate Ms. Young from my firm.

Ms. Young made it clear today during the press conference that I only act at her behest that I have handled her case from the beginning until now at her direction.

The Corporation Counsel's office continues to refuse to tell the truth. This simply shows that their office under Celia Meza will continue with the same divisiveness and lack of candor that persisted under her predecessor.

During the mediation which was scheduled to go from 930 to 5 p.m., city made a take it or leave it offer before one o'clock p.m. and they made the decision to walk away from mediation while we had another proposal on the table, they refused to further negotiate" and wasted taxpayer dollars.