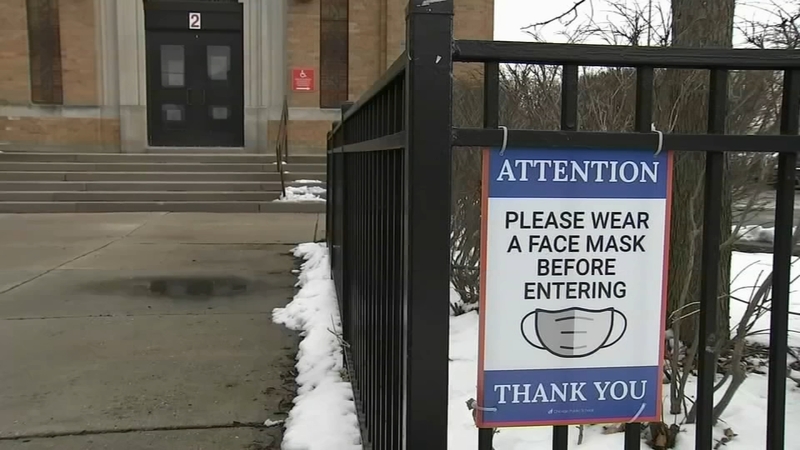 CHICAGO (WLS) -- On Monday, Chicago Public Schools parents Kelley Escamilla and her husband gave their 3rd and 6th graders a choice: Go to school and wear a mask or don't.

They didn't wear masks and the school sent them home.

Soon, Escamilla and others like her may get their wish. During a visit to Mt. Greenwood Elementary School this morning, CPS CEO Pedro Martinez suggested the time to make masks optional is close.

"We're seeing cases at a record low. We're seeing people feeling safer. So even though we're continuing to strongly encourage masking we are moving in this direction to go optional," Martinez said.

But when, exactly, will the mandate be lifted? That is a question Martinez left unanswered as talks with the Chicago Teachers Union have continued.

"We are all in a better place with COVID-19 today than we were a month ago, but we also understand that schools are congregate settings, and less than 25 percent of students in many South and West Side schools are vaccinated," a statement released by CTU read, in part. "Our agreement with the district sets the table for equity and safety for all, and we'll continue to advance COVID mitigations that help keep Black and Brown children and families safe."

That bargaining agreement and its validity when it comes to enforcing a mask mandate is being challenged in court, however, with a hearing scheduled for next week. Not all parents are ready to let masks go for their children, with some saying in a district this big, a one-size-fits-all solution is not the answer.

"When they make a call like we're making masks optional, the parents that have the low vaccination rates are really going to be the ones that suffer. But if they would like to do some nuance. I would love to see that as a parent," said CPS parent Michelle Bautista.

According to Martinez, additional details and a timeline for Chicago Pubic Schools to go mask optional will be released next week.

While this shift appears to be in the works, downstate attorney Tom Devore has filed a request for a temporary restraining order against Chicago Public Schools' current mask mandate, claiming the district doesn't have the legal authority to require them.

He believes CPS will switch to mask optional before the judge hears the request next Thursday.

"I assure you that it's coming and whether it's going to be Monday or Tuesday, it will happen before that hearing," Devore said. "The people of Chicago, which is always been my goal, is to get masks off of these children, districtwide statewide."

Devore spearheaded the effort to get the statewide school mask mandate dropped but it has remained in place in Chicago because of a safety agreement with the Chicago Teacher's Union.

The CTU released a statement saying, "This lawsuit is being pushed by a rightwing extremist trying to leverage the safety and wellbeing of our school communities for his own political gain.... masks provide a critical layer of protection as our school communities struggle to get lifesaving vaccine shots in the arms of our students and families."

While the CTU has been informed that the district is moving towards a mask optional policy, top CPS officials said they're taking steps to make sure the transition is done right.

"And so for us, it's very important that we have principals a part of it, our parents, our staff and so we just wanna make sure that we're having the right conversations and the right communications, so early next week we will be more definitive on a timeline," Martinez said.