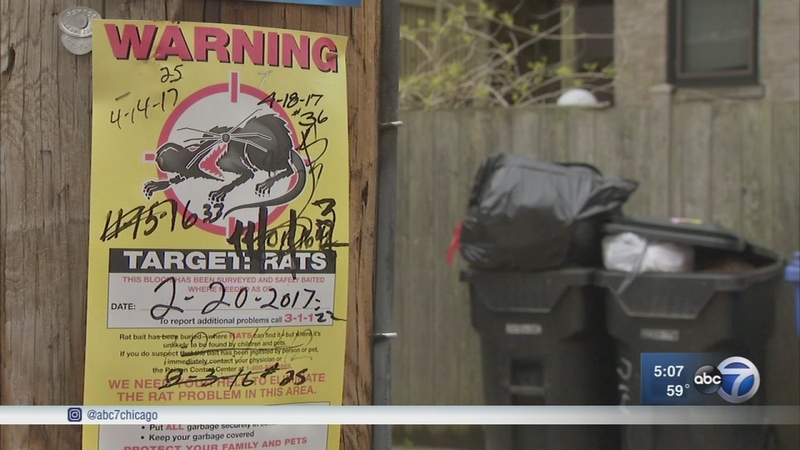 CHICAGO (WLS) -- Chicago's rat problem is growing. Complaints about the rodents are up and the city can no longer use one method to get rid of them.

People who live and work on Chicago's North Side, like Linda Gibson, say there's rarely a day that goes by when they don't see a rat.

"When you come out at night or early in the morning you have to make some noise because you don't know where they're coming from," Gibson said.

People all over the city are noticing more of the nasty critters as complaints about rats continue to rise despite efforts to control the population. Residents in this area say demolition of the old Children's Memorial Hospital and new construction only made the problem worse.

"They're doing what they're supposed to do, Streets and Sanitation and the 43rd ward," said Fernando Carbajal, a North Side resident.

Complaints are up about 30-percent from November 2016 to February of this year compared to the same period one year ago - according to data from officials at the Chicago Department of Streets and Sanitation - who blame the increase on a mild winter.

Rodent patrols responded to 76-percent of those complaints within 5 days. The increase in complaints may also be because of a new poster which shows a more realistic image of the pest.

The 28 two-person teams assigned to the Bureau of Rodent Control also stopped using dry ice in rat borrows -- which when it warms into a gas, suffocates the trapped rats -- amid objections by an animal rights group and after learning the chemical had not be approved by the federal EPA as a way to safely eradicate rats.

"You can only really use dry ice primarily in the parks where you have flat, level ground and you're able to identify all the entrances and exits to the rodents' borrows," said Chicago Dept. of Streets and Sanitation Commissioner Charles Williams.

Last year, the city began enforcing a new ordinance requiring developers to have a rat abatement plan -- while encouraging Homeowners and restaurants to keep garbage contained inside a closed bin and neighborhood dog owners to pick up after their pets.