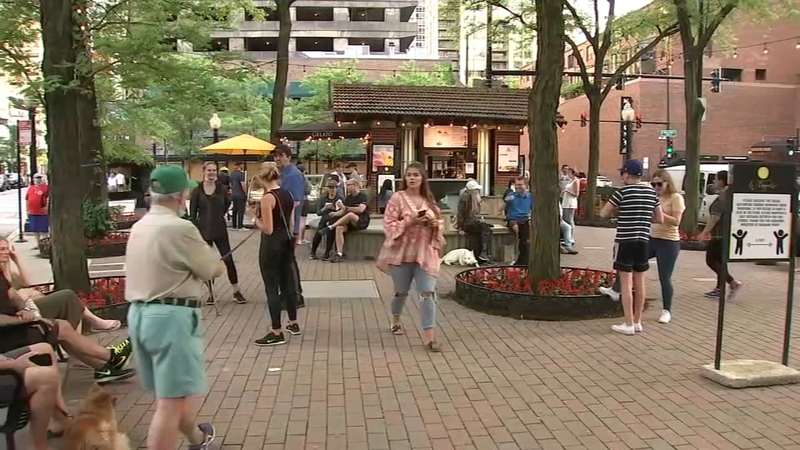 Chicago wraps up first day in Phase 3 of reopening

CHICAGO (WLS) -- Chicago has moved into Phase 3 of reopening under Mayor Lori Lightfoot's plan Wednesday, despite the damage from looting and unrest over the past several days in wake of the death of George Floyd.

Access has also been restored to the downtown area and bridges were lowered across the Chicago River Wednesday morning.

The mayor is calling Phase 3 "cautiously reopening" and she is encouraging people to shop local and support those businesses trying to get back on their feet in the midst of the unrest.

The wait staff were busy delivering food Wednesday afternoon at Taven on Rush, almost like a normal lunch crowd in mid-June

The cloudy morning and cautious customers lead to a slow start to the first day of reopening for the West Town Bakery. But after being closed for nearly three months because of the stay at home order, they'll take it.

"You get a sense people want to be outside and they want to be around other people. It's a good feeling," said Scott Weiner, of Fifty/50 restaurants.

But there are changes: aside from masks and hand sanitizer, barcodes on the tables allow you to pull up the menu on your phone so there is no touching.

And in the Gold Coast, Tavern on Rush Has just 12 tables right now - but they are full. The wait staff were busy delivering food, almost like a normal lunch crowd in mid-June. But it should get a big boost shortly when the City's experimental open street program allows them to double capacity by putting tables in the street.

Steven Hartenstein, the CFO of Stefani Restaurants said, "We're gonna crawl, walk then run. We are reinventing ourselves and figuring it out."

The Phase 3 reopening also allows hair and nail salons back in business. And many are full of customers who were overdue for a cut or color.

"What's the best way to make yourself feel better than a pampering day and getting your hair done," said Morgan Holmes, of George the Salon. The Phase 3 plan tends to favor restaurants with large outdoor spaces, such as the patio at O'Donovan's on the North Side.

Rooftops like the one at Old Crow Wrigleyville are also allowed to reopen.

Spared from any significant damage, Mercadito is the only restaurant along Kinzie willing and able to open Wednesday.

Boarded up businesses. Empty patios. This is not what it was supposed to be like in River North's popular restaurant district Wednesday. Businesses that have been closed for months should be welcoming back customers, even if on a limited basis.

Instead, there is still cleanup taking place, following this weekend's looting. Spared from any significant damage, Mercadito is the only restaurant along Kinzie willing and able to open.

One block west, it's a different story. A tearful eye is painted on the outside of Old Crow Restaurant. The popular River North establishment was, along with its sister restaurant, Moe's Cantina, severely damaged Saturday night. They will remain closed for at least two more weeks, unable to even offer takeout or delivery.

"The neighbors are amazing," said Sam Samchez, at Old Crow. "They came out and helped me clean, with dustpans. To me, that was very touching, so it gives you hope when you see stuff like that."

Others are setting up to open on Thursday or Friday, needing just a little more time to get ready.

But while restaurants remain mostly closed here, the salons are all back open - even though at first glance, they may not appear to be. Tracy Adduci on Clark was among those businesses looted Saturday night.

"We did it. She said we would open and we totally did it. It took me a couple of times to start feeling normal and now I feel really good to be in there," said Sheena Dacunha, at Tracy Adduci Salon.

Chicago moved into Phase 3 of reopening Wednesday morning, with salons back in business and restaurants opening with outdoor seating.

George the Salon in the Gold Coast is making women gorgeous once again, but with safety measures in place. Clients get temperature screenings upon arrival along with health screening questions.

"As far as the salon, we have dividers between cashiers as well as a shampoo bowl since with the cosmetic industry it can be a concern, but we make sure we're sanitizing everything," said Morgan Holmes with George the Salon.

Customers said that while they know the virus is still out there, they feel safe.

"It sounds like with the masks and washing your hands frequently that you really can keep yourself safe," said customer Jennifer Burns.
READ FULL REMARKS: Mayor Lori Lightfoot's State of the City Address on June 2, 2020
EMBED More News Videos

Chicago Mayor Lori Lightfoot gave a State of the City address on June 2, 2020.

Still, many remain skittish about reopening, including Issues Barber Shop and Beauty Salon. The owner Yvenetta Welch is waiting to see if the unrest caused by George Floyd's death dissipates.

"I'm just not sure," Welch said. "I'm not really sure at this time because of all the looting and everything."

The mayor promised more recovery money for businesses and more police presence so people can feel safer as they venture out.

"I want every business in Chicago to hear me," Lightfoot said. "And when I say that, we are 110% dedicated to us successfully reopening safely and securely and getting back up on your feet."

The mayor promised high visibility police patrols downtown and in other restaurant corridors so people who want to dine out can feel safe sitting outside, which will be allowed in Phase 3.

While the city moves forward with reopening, Chicago will still have a curfew until further notice, going into effect at 9 p.m. and expiring at 6 a.m.