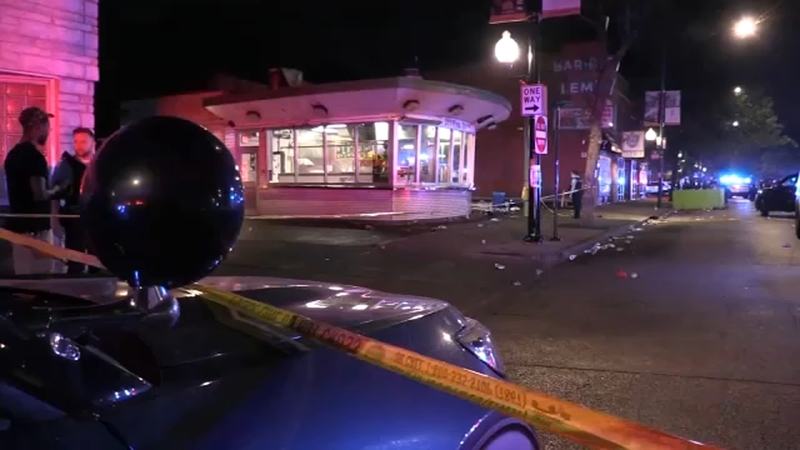 CHICAGO (WLS) -- Ten people were shot early Saturday morning in an attack in Chatham on the South Side, Chicago police said.

The Cook County Medical Examiner has identified Kimfier Miles, 29, as the person killed in the mass shooting.

The shooting happened just after 2 a.m. in the 7500-block of South Prairie Avenue, according to CPD.

Chicago police said the victims were on the sidewalk when two male suspects approached and opened fire.

Miles was shot in the abdomen and left knee, and later died at the University of Chicago Medical Center, according to officials.

Friends shared a picture of Miles before they honored the mother and Chicago resident with prayers and a balloon release.

The rest of the victims, who ranged in age from 23 to 46, were reported in good to fair condition after being shot, police said.

"This is a tragedy. Right now, I am praying for the victims and families at this time. Let me be clear, these attacks on 75th Street or, anywhere in our communities, are unacceptable. We have been working hard to rebuild 75th Street as a thriving business corridor, and the community is committed to this vision," 6th Ward Alderman Roderick Sawyer said. "These past nights will not undo years of hard work and business development. These are the actions of a few; who were not patronizing the businesses. I am committed to continued investment in violence prevention methods and ensuring our communities are safe."

A crowd of people were in the area where the shooting occurred later Saturday morning.

"Mayhem, mayhem -- people running around, some people still shot, victims around the corner, down a block or two, people crying of course, people trying to figure out who's going to which hospital," said Pastor Donovan Price of Solutions and Resources Ministry.

Locals say it's known as a spot where people bring their stylish cars and motorcycles to show them off.

"Somebody was cracking fireworks," said one woman who didn't want to be identified. "I heard they didn't like that. The next thing I know, someone just started shooting at the crowd, just out the blue."

Businesses along 75th Street, also known as Chicago's Black Wall Street, are coming together vowing not to let the violence or the pandemic stop this neighborhood from thriving.

At her Brown Sugar Bakery on 75th Street, founder Stephanie Hart offered a piece of cake for peace to the neighborhood just hours after it was once again besieged by violence.

"We've been working extremely hard to create an environment, especially during the pandemic, that people felt good about coming," Hart said.

The business is one of several in the Chatham neighborhood that is reacting to the early morning mass shooting.

Over the last 30 years, businessman Eddie Elkhatib has owned numerous establishments in the community, including A and S Beverages.

He's concerned the violence will make efforts to stabilize the area even harder.

"The sad part is, we are working with the neighbors and the police department to help over these problems. Guns are really the problem," Elkhatib said.

Alderman Roderick Sawyer, 6th Ward, calls the shooting a "tragedy" that will not undo the years of hard work in the area.

Police are still investigating the latest incident as neighborhood businesses meet to come up with different ways to make sure that this neighborhood continues to thrive.