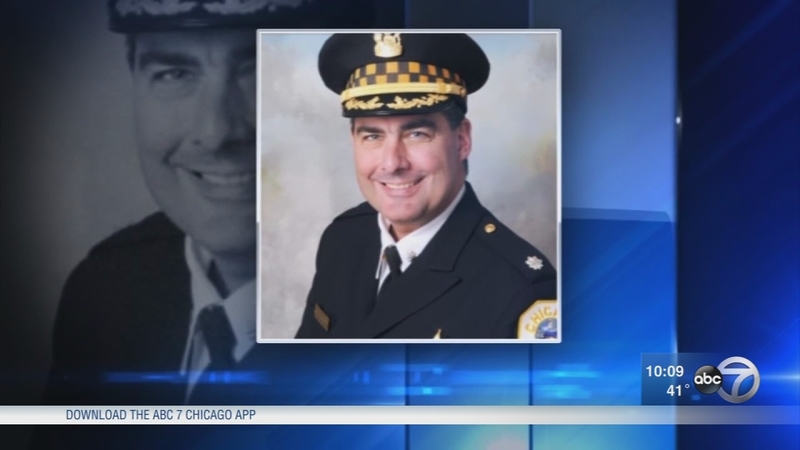 EMBED <>More Videos
CHICAGO (WLS) -- A 44-year-old Chicago man who is a convicted felon was charged Wednesday in the fatal shooting of Chicago Police Cmdr. Paul Bauer at the Thompson Center.

"This should come as no surprise that this isn't his first run-in with the law," said CPD Supt. Eddie Johnson during a press conference.

Legghette, a four-time felon who had just finished parole, killed the high-ranking commander when he fired seven shots from his semi-automatic weapon at about 2 p.m. Tuesday.

Bauer, 53, was shot and killed assisting tactical officers in the Loop. Legghette was allegedly wearing body armor when Bauer tried to approach him after hearing on the radio that officers were in pursuit of him on Lower Wacker Drive.

Legghette, who is scheduled to appear in Bond Court, has a 24-year history of drug, gun, and armed robbery offenses, as well as illegal possession of body armor, and he spent 16 years in state prison.

"Some individuals just do not play by society's rules. He was one of them. Shouldn't be out there. Ever. Ever again," Johnson said.

Colleagues, friends, neighbors and family gathered to remember Bauer in the 18th District. People lit candles, left flowers, and paused to pay respect to the commander.

"He was always a gentleman. When this happened yesterday, I was reminded of him being a true gentleman," said Randall K. Blakey, of the Near North Unity Program.

Blue bows were tied around trees to honor him in his Bridgeport neighborhood. Bauer left behind his wife, Erin and his 13-year-old daughter Grace.

"You would see Paul and Erin and Grace every, every Sunday like clockwork walking to church. Again, the parishioners loved him," said neighbor and friend John Minas, whose daughter is close friends with Grace.

"He's galvanized the city. The neighborhood, the police district, and kind of brought everybody together again. And unfortunately it had to be under these circumstances," Minas said.

Police credited a quick-thinking taxi cab driver, whose vehicle's camera captured audio and video of Bauer chasing Legghette across the street, as an excellent witness to help piece together their case.

The driver then pulled over, got out of his cab and used his cellphone to capture video of the aftermath.

Just before the shooting, Cmdr. Bauer was near the Thompson Center when he heard the radio call. He was downtown for training and a meeting.

Bauer, a commander who did not like to stay behind a desk, did not have a chance to reach for his gun before the suspect fired, police said.

The community came to the 18th Police District to remember Cmdr. Bauer with prayers, flowers and food.

"ONE OF THE GOOD GUYS"

Chicago continued Wednesday to mourned Bauer, who was beloved and respected throughout the city.

Purple bunting was hung over the 18th District building and a steady stream of well-wishers bringing food and flowers were seen throughout the day. Many in the community remembered him as being accessible and open to meeting with everyone. On Wednesday, Bauer would have been at Eva Café, hosting his monthly chat, Coffee with a Commander.

"People would come to him with issues, he'd talk to them about that, or people would just ask how their life is going, you know. He seemed pretty interested in everybody," said Tucker Brookshire of Eva's Café.

Supt. Johnson and Mayor Rahm Emanuel called him "one of the good guys" and asked the public to think of his wife and daughter during this difficult time.

"Our hearts will hurt as a city for a long time," Emanuel said.

This morning all command staff members will report to headquarters for an address by the Superintendent. Detectives worked through the night & continue to comb through evidence to build our case in the murder of Cmdr. Paul Bauer. We expect to file charges sometime in next 36 hrs.

Earlier, Johnson and Emanuel met with his top command staff at a meeting at police headquarters. The mayor was emotional as he consoled the men and women of the 18th Police District.

"I ask each of us, in the days ahead, as you see Chicago's officers doing their job, reach out to them as a member of your family, thank them. This is like a gut punch to the police department, a gut punch to the city," Emanuel said.

A 44-year-old Chicago man charged in the shooting of Cmdr. Paul Bauer has a long criminal history.

Johnson pledged to take care of Cmdr. Bauer's family and that police officers will step in for him and take his young daughter to school moving forward.

"Moving forward, let's not forget the legacy of Commander Paul Bauer. He gave his life for the protection of this city, and it just goes to show you day in and day out police officers run to trouble not away from it, and I think it's important that we recognize that and again as a city i just ask you all for your thoughts and prayers for the Bauer family," Johnson said.

To make a donation to the Bauer family, please give to the "Paul Bauer Memorial Account" at any @CPFCU2015 location. https://t.co/sm3DWf7e2n We are holding you in our hearts. https://t.co/9nfXZds50w

RETURNING TO THE SCENE

Officers returned to the Thompson Center Wednesday morning with a surveillance picture of the suspect in hand, talking to people returning to work and trying to get more information.

"They asked me have I ever seen this guy and they showed me a photo of this guy and I said, 'No, I never seen him before,'" said Will Morrow.

After the shooting, the area around the Thompson Center was shut down and buildings were evacuated. Everything was back open Wednesday morning, but there's a sense of sadness.

"It is a cloud that hangs over, you know, nobody wants to have their family member killed or have anybody killed period," said Jermaine Powell.

On a nearby building overlooking the Thompson Center Plaza, notes saying "Thank you CPD" are taped to the windows and a small memorial is now growing for a man who made the ultimate sacrifice. Christina Chan left flowers on her way to work.

"I left some roses, red roses. I just felt like it symbolizes the love that he left behind with his family," she said.

The commander left an indelible mark on the community and the police force. During his 31-year-career with CPD, Commander Bauer worked extensively with the mounted patrol. He commanded the mounted patrol during some of Chicago's biggest events, like the Stanley Cup celebration for the Blackhawks in 2013.

But beyond his police work, many said he was very passionate about the community he served.

"There was never a time when he hasn't answered a call, taken a call or done whatever he could on behalf of this community, so we are going to sorely miss him," said LaSalle Street Church Executive Pastor Randall K. Blakery.

Those who knew him say he was passionate about connecting with the community which was evident in the outpouring of support at the 18th District, where several people came by this morning to drop off food and cards

"I've met Commander Bauer several times, a wonderful guy and he cared greatly about the 18th District, so just spread a little love to them this morning. It's just heartbreaking," said Hollis Hanover.

"It's a very small thing, I wish we could have done more but just wanted to let them know that the community is thinking of them and cares about them," said Maureen Smithe.

Community leaders say Commander Bauer went above and beyond his duties as a commander and did what he could to connect with residents in his district.

Police officers will be wearing black bands over their badges in honor of Commander Bauer and purple bunting was put up at Chicago Police Headquarters. Mayor Emanuel has ordered city flags to be flown at half-staff and Governor Bruce Rauner has ordered the flags at the Thompson Center to be flown at half-staff. Thursday evening Rauner ordered all flags state-wide to be lowered in honor of Bauer Thursday.

A visitation will be held at Nativity of Our Lord Church on Friday evening from 3 p.m. to 9 p.m. Funeral services will follow on Saturday morning at 10 a.m.