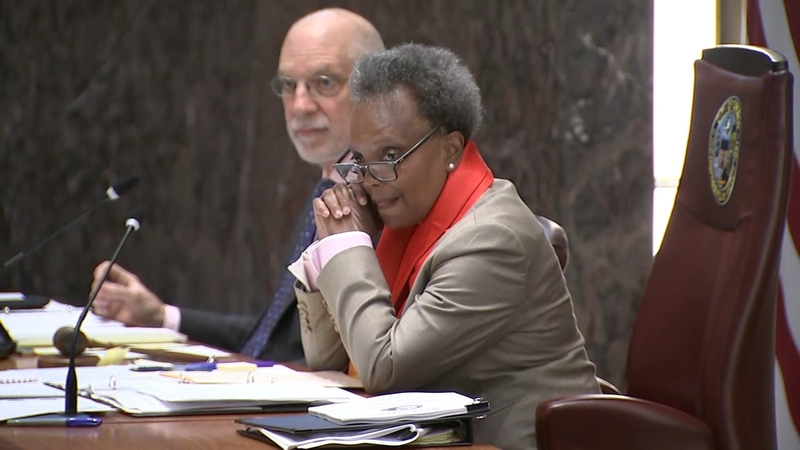 CHICAGO (WLS) -- Efforts to raise the threshold for speed camera tickets hit another snag Wednesday during a city council meeting that devolved into name calling and headshaking.

Allies of Mayor Lori Lightfoot delayed the vote once again, setting off a series of retaliatory delays on other business.

Chicago politics played out in what some city council members called embarrassing fashion. The meeting was marked by chaos and frustration as public business ground to a halt.

The Chicago City Council was poised to vote on a speed camera ordinance that would eliminate tickets for those caught driving between six and 10 MPH over the limit.

"With all that is happening in many of our communities, I think this is not the proper step to take," 28th Ward Ald. Jason Ervin said.

And with that, mayoral ally Ervin used a procedural move called "defer and publish" to delay the vote.

Alderman Beale objected and argued the move was illegal, but in the end lost the protest.

But when it came time to move on to other business, the retaliation began in earnest.

"I wish to defer and publish the item with Alderman Lopez," Beale said.

With that, votes on more than a dozen items were then delayed, exasperating the mayor and fellow aldermen.

"I'd like to be recorded as being thoroughly embarrassed and ask my colleagues to cease and desist," 40th Ward Ald. Andre Vasquez said.

"Just the fact that we can't get this heard, we can't debate it, we can't bring it to the floor, you know that's a dictatorship, that's not a democracy," Beale said. "Well, you know what... that first blow was done by the mayor."

"We had affordable housing. We had Chicago Transit Authority funding for rebuilding stations rebuilding track," Waguespack said. "These are things that my committee and the staff worked on very diligently to make sure we got this through."

The mayor and her team defended the fight to keep the speed threshold at six miles per hour, saying it's about safety - even though the change would cost the city around $45 million in revenue.
The mayor also defended her delay tactic while criticizing her opponents' retaliation.

"I think what the rest of the council, if you read the room as I did, they want to be about the people's business," Lightfoot said. "And what they don't want is gamesmanship and obstruction, which is the kind of unfortunately very, very common fare with those two individuals."