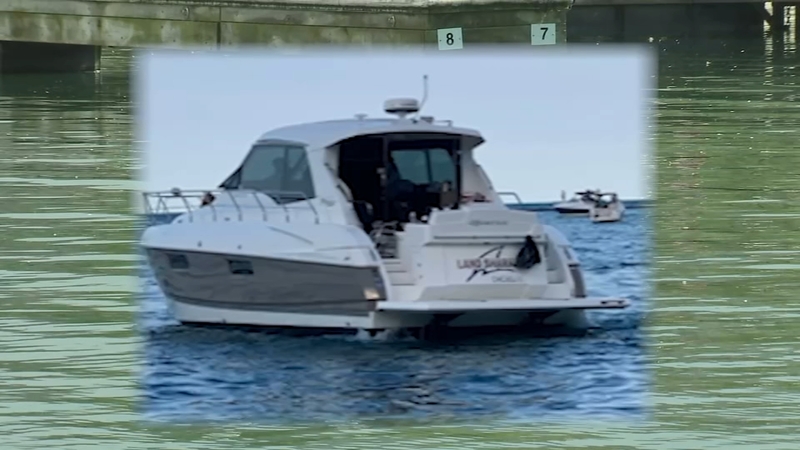 CHICAGO (WLS) -- A yacht worth hundreds of thousands of dollars has been stolen from a marina on Lake Michigan, putting the Coast Guard and other agencies on alert as they ask people to keep an eye out for the boat.

The Chicago family who owns the boat shared photos of the yacht that police said was stolen.

The vessel, named the "Land Shark," went missing on Thursday while docked in New Buffalo, Michigan.

"The family arrived in New Buffalo, Michigan on Friday and went to the marina to go on their boat and the boat wasn't there. This isn't a cheap boat. This is a very expensive boat," said the family's attorney John W. Chwarzynski Jr.

Chwarzynski is representing the family, who has filed a report with the New Buffalo Police Department.

"There are a lot of questions that need to be answered," he said.

The family, who did not want to be identified for safety reasons, said their boat was stolen from the New Buffalo, Michigan transient marina.

An employee of the company they hired to clean the boat was on board when a man reportedly posed as a family member, then drove off with it.

New Buffalo Police said this grand theft case is a top priority for their small department.

"The Coast Guard knows [and] they have already been informed. The marine division and the harbormaster has contacted several marinas around Michigan," police said. "It is going to be a white male, dark tan, wearing a man bun, shaved head on the sides, white t-shirt and possibly a white sweatshirt, wearing orange shorts."

Detectives said this is the first case of its kind in their area, adding that the suspect was able to get the boat out of the dock and away from their sights within just minutes.

"Our investigation has led us to believe that they took the boat through Lake Michigan, and that means through the locks of Chicago and traveled down the Mississippi River and potentially out of the country," Chwarzynski said.

Now, the family is focused on their safety since their personal information that was on the boat is also at risk.