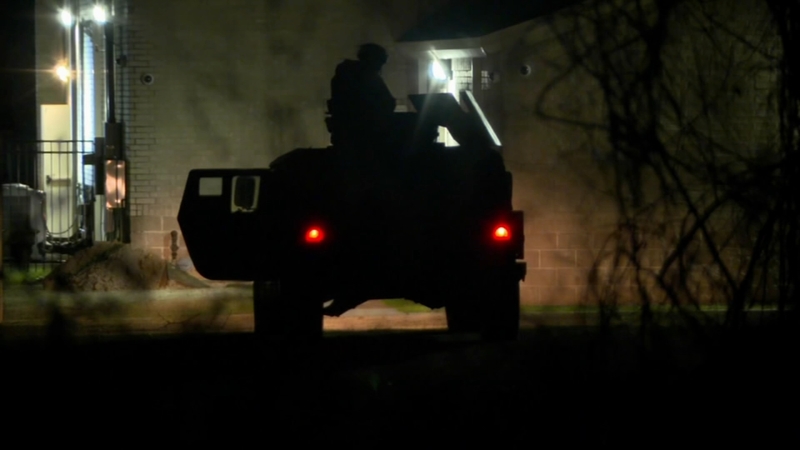 CHICAGO (WLS) -- A hostage situation at a Texas synagogue Saturday is triggering to those in the Chicago Jewish community.

Security measures are already ramping up at some area synagogues, as many are praying for a peaceful outcome.

All four hostages were safely released and the suspect is dead, officials said. The FBI identified the alleged hostage-taker as 44-year-old British citizen Malik Faisal Akram.

Although hundreds of miles away, Jewish community members in Chicago are on edge.

"We should become a force, a stronger force, of goodness to battle this negativity," said Rabbi Meir Moscowitz, regional director of Lubavitch Chabad of Illinois.

As an hours-long hostage situation unfolded at a synagogue in Colleyville, Texas outside of Fort Worth, some synagogues in Illinois are now with upgraded security measures.

"We want to follow all precautions, be in touch with law enforcement, upgrade the security, but together with that, not slow this important prayer and activity," Rabbi Moscowitz said.

"While there's no actionable intelligence suggesting cause for concern in Chicago, the Chicago Police Department is working to ensure all houses of worship and faith-based institutions here are secure and safe," Chicago police said.

CPD is maintaining special attention at houses of worship throughout the city. Additionally, we are communicating with faith leaders to address any concerns they may have.

While there’s no actionable intelligence suggesting cause for concern in Chicago, the Chicago Police Department is working to ensure all houses of worship and faith-based institutions here are secure and safe.

A source familiar with the situation told ABC News that an armed suspect, claiming to have bombs in unknown locations, took a rabbi and three others hostage Saturday morning. The person was said to be demanding the release of convicted terrorist Aafia Siddiqui.

Siddiqui was sentenced to 86 years in prison after being convicted in Manhattan federal court in 2010 for trying to kill U.S. soldiers and FBI agents in Afghanistan.

RELATED: Vandalism at Skokie synagogue being investigated as hate crime

Anti-Defamation League said they have people on the ground in Texas, according to David Goldenberg, the league's Midwest director.

"Many Islamic terrorist groups have called for her release for many, many years. And, she is a well-known top al-Qaeda operative," he said.

The standoff not only triggered action in the Chicago area, but also nationwide, with concerns about safety in a place of worship.

As an hours-long hostage situation unfolded at a synagogue in Colleyville, Texas, some synagogues in Illinois are now with upgraded security measures.

"I've been on edge all day, as I'm sure many people have been," said Lonnie Nasatir, president of Jewish United Fund of Chicago.

As concerns rise, especially in recent years, the Jewish United Fund of Chicago has invested $1.6 million in security measures at 88 Jewish institutions in the city and surrounding suburbs.

"I think it's a sad state of affairs here because in America we've always treated our sanctuaries as a sanctuary, right? As synagogues and mosques and churches," Nasatir said. "It just shows that there's no place, unfortunately, where hate isn't invading our communities."

The FBI, along with local authorities, are investigating. The White House has also been briefed.

Officials have yet to say what happened to bring the hostage situation to a close, but did say the suspect is dead.

"We do believe with our engagement with the subject that he was singularly focused on one issue and it was not specifically related to the Jewish community," officials said in a press conference Saturday night, adding that they are continuing work to find a motive.

"Thanks to the courageous work of state, local and federal law enforcement, four Americans who were held hostage at a Texas synagogue will soon be home with their families. I am grateful to the tireless work of law enforcement at all levels who acted cooperatively and fearlessly to rescue the hostages. We are sending love and strength to the members of Congregation Beth Israel, Colleyville, and the Jewish community.

There is more we will learn in the days ahead about the motivations of the hostage taker. But let me be clear to anyone who intends to spread hate-we will stand against anti-Semitism and against the rise of extremism in this country. That is who we are, and tonight, the men and women of law enforcement made us all proud."
Report a correction or typo
Related topics:
chicagolooptexassafetyhostagesynagoguesecurity
Copyright © 2022 WLS-TV. All Rights Reserved.
SAFETY
TX shooting prompts heightened security at schools
New documentary teaches rip current safety, survival
Tornado watch vs warning: What's the difference?
Chicago mayor tries to reassure people amid downtown safety concerns
TOP STORIES
More Chicago neighborhoods, businesses want private security
Uvalde school shooting: What we know about 19 kids, 2 teachers killed
Abbott slams Chicago gun laws: 'Not a real solution'
Chicago's 'Walking Man' lit on fire while sleeping on street: source
LIVE RADAR: Storms prompt tornado warnings; funnel cloud spotted
Girl, 8, found dead in Uptown home, police say
Chicago early voting delayed again due to ballot changes
Show More
Chicago Weather: Periods of rain, storms Thursday
IDPH reports 9 possible cases of hepatitis in kids
Timeline breaks down Uvalde shooter's movements day of massacre
Teen athlete starts lip gloss business 'for all skin types'
Luis Arroyo sentenced for bribery scheme
More TOP STORIES News