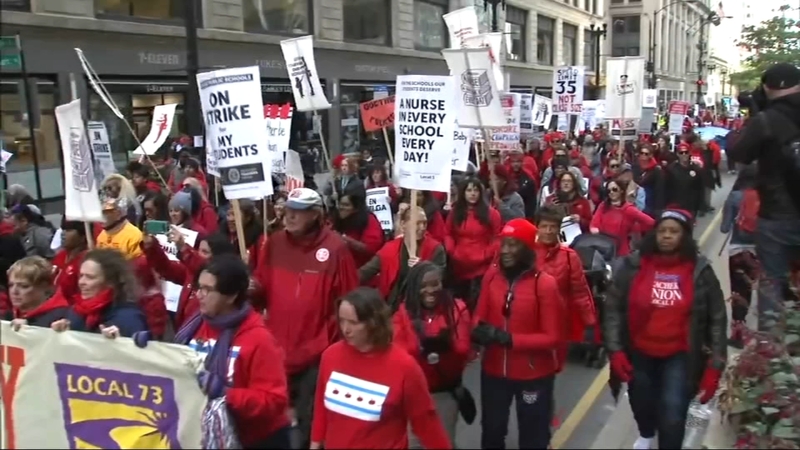 EMBED <>More Videos
CHICAGO (WLS) -- The second day of the Chicago Teachers Strike ended without a contract deal, but teachers said some progress was made in their negotiations with Chicago Public Schools.

Representatives from the union's bargaining team said they received a proposal about support staffing in writing, which they called a positive step, but it was not enough. Negotiations will continue through the weekend at Malcom X College.

Mayor Lori Lightfoot and CPS CEO Janice Jackson released a statement saying, in part, "We are encouraged that today's negotiations were productive and yielded real movement on a number of key issues, including staffing for clinical groups, special education, and supports for Students in Temporary Living Situations."

CPS classes were canceled for a second day Friday and, Lightfoot said, will remain canceled until the teachers give word they've agreed to a contract and the strike is over.

Thousands of CPS teachers returned to the picket lines Friday morning. Twenty-six thousand CPS teachers and 8,000 support staff workers including custodians, special education assistants and bus aides are on strike. It is the first CPS teacher strike since 2012.

Chicago teachers and support staff marched and chanted outside CPS headquarters downtown on the second day of their walkout.

"Day two is tough. We were all excited yesterday but we realize that this is a marathon not a sprint," said CPS speech pathologist Lara Stachler. "There's a lot of work to be done, and a lot of ground to cover."

"I think CTU has been bargaining very passionately," said CPS social worker Carolina Juarez-Hill. "I believe CPS has not because they did not take this more serious until we had our 94 percent strike vote."

"We are hopeful, we're working hard, we are going to be working every single day as long as it takes to get our students back in the classroom," said LaTanya McDade, CPS chief educational officer.

Teachers said there was some movement at the bargaining table Thursday, with the city coming to the union with an offer on reducing class sizes at overcrowded schools. But negotiations fell short, they said.

"I don't think it addresses class sizes in about 80 or 90 percent of our classrooms across the city, so we're going to need to do better than that, but it is a step in the right direction," Sharkey said.

They mayor stepped up the pressure on the union Friday, suggesting they are not showing the urgency needed to get a deal done and keep the strike as short as possible.
"And we need to be at the table every single day, seven days a week, at least 10 hours a day until we get a deal done, so the ball is very much in their court," Lightfoot said.
WATCH: Lightfoot, Sharkey hold press conferences on 2nd day of strike
EMBED More News Videos

Mayor Lori Lightfoot speaks on the negotiations with CPS teachers on the second day of a strike.

CTU President Jesse Sharkey gives an update on negotiations on the second day of a strike by CPS teachers.

The union said discussion Friday covered staffing concerns and the Board of Education's class size proposal from Thursday. But leaders took umbrage at the insinuation they were not being urgent about getting a deal done because they took time to participate in rallies during the strike.

"We have been at the table for 10 months, they have been urgent for 10 minutes, and it took 30,000 people on the streets yesterday to make them urgent," said CTU Vice President Stacy Davis Gates.

Teachers hit the picket lines and marched downtown on the second day of the Chicago teachers strike.

Masses of teachers marched through the streets of downtown and the union gathered for a rally at City Hall Friday. The rally was followed by a march that looped up to River North before circling circled back to Daley Plaza.

"We need nurses in our schools, and we need Lori Lightfoot to listen to us," said Moneka Reynolds, kindergarten teacher.
"We have to go as long as we have to go and do what we have to do. In the long run it's gonna be worth It," said Ed Carter, literacy teacher.
"We are negotiating. We are bargaining. And we are trying to find a solution that will fix our city. And we are here until that happens," said Jon Reiman, visual arts teacher.

CTU President Jesse Sharkey joins ABC7 to talk about negotiations with CPS as a teacher strike enters its second day.

"We have been asking to bargain on this issue for literally 10 months," Sharkey said. "Our proposals went in in January. This was the first written offer that gets the ball rolling on the subject. It's a shame that it happened on the first day of a strike. It's not there yet though."

They're pushing for smaller class sizes and more resources. While no deal was reached, some progress was made at the bargaining table following all-day negotiations after CPS submitted a written proposal on reducing class size.

CPS CEO Dr. Janice Jackson also joined ABC7 Friday morning and some progress has been made in negotiations.

CPS CEO Dr. Janice Jackson also joined ABC7 Friday morning and some progress has been made in negotiations.