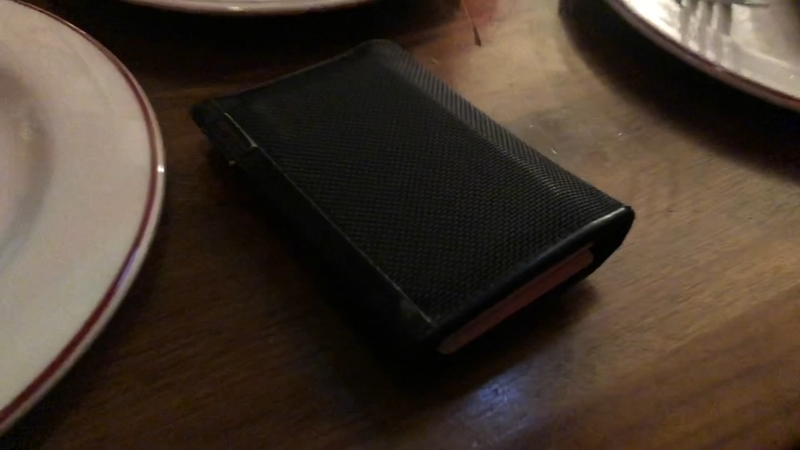 CHICAGO (WLS) -- Dining in a downtown restaurant is already expensive. Now add in the cost of a stolen phone, tablet or wallet.

The ABC 7 I-Team found that there have been thousands of restaurant thefts in the last several years, and more than 2,500 in 2019 alone. Consumer Investigator Jason Knowles and the I-Team found out how to keep your items safe while dining out this holiday season.

Police say, in many cases of restaurant theft, the thieves are taking from your table. They're swiping phones, wallets and purses that are out in the open while your guard is down.

The ABC 7 I-Team recently analyzed Chicago crime data from the Chicago Police Department database, selecting "theft at restaurants" to narrow it down, then "pick pocketing", "purse snatching" and "thefts of any value" in the subcategories. Keep in mind some of the victims could be employees or owners of the restaurant.

The arrest rate is only 3 percent. Police said many victims don't follow through after filing a police report.

The I-Team dove even deeper into the theft numbers. Since the beginning of 2016, 57 percent of them happened downtown in the 42nd Ward, which consists of Streeterville, Gold Coast, River North, the Loop, the Near West Loop and the New East Side.

ABC 7 has covered restaurant thefts cases through the years. In one case, a couple walks through a Bucktown restaurant, sits down, then quickly leave with a young diner's wallet. And in River North, a couple take seats behind their victim, go into the purse that's hanging on her chair, and steal her wallet.

So how do you protect yourself from these brazen thieves; brave enough to walk into a restaurants and steal from your table?

"You have all these people around you that you may not necessarily be paying attention to your device or phone while it's in your pocket or in your purse and its easy pickings for those who are committing these types of crimes," Chicago Police Lieutenant Ozzie Valdez.

Valdez showed the I-Team surveillance video, in which young men talk to a patron in a Loop restaurant then steal his phone after hiding it under an informational flyer.

Then Valdez and his team gave The I-Team a demonstration of this common ruse.

The thief walks up to the diner, puts a pamphlet over the diner's phone or wallet and then, while the diner is distracted, Valdez said they "take what's underneath and walk away and say 'sir, thank you very much for your time'."

Police also say to zip purses and securely wrap straps around the back of the chair so it can't be pulled away while sitting.

The I-Team wanted to know what restaurants are doing to tackle the problem.

The Illinois Restaurant Association refused to speak on camera, but their PR firm sent the I-Team a statement, saying, "Customer safety is top priority for any business. As restaurants are anchors of their communities, collaboration and communication between restaurants and law enforcement, neighborhood groups, and other local businesses are essential to enhance the overall safety of busy commercial areas in Chicago."

"Make sure you put your device somewhere where someone has to cross your sight of vision to get to it," said Valdez. "Don't leave it on the table, don't leave it in your open purse or a coat pocket that's hanging on a chair."