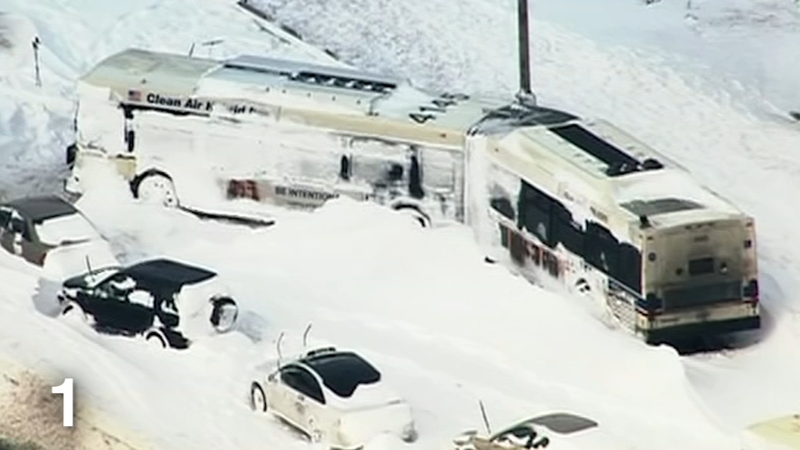 CHICAGO (WLS) -- From blizzards to heat waves, the ABC 7 Weather Team ranked the top 10 weather events that impacted the Chicago area over the past decade.

#10 - LARGEST HAIL EVER IN ILLINOIS


#9 - RECORD RIVER FLOODING
Record rainfall led to a new high crest on area rivers on April 17-18, 2013. The western suburbs saw over 7 inches of rain, which pushed the Fox and Des Plaines River to all-time record highs. Many homes were flooded along the river with water slow to recede.

#8 - COLDEST FEBRUARY ON RECORD
February 2015 tied for the coldest February on record. You had to bundle up all month long as the average monthly temperature was just 14.6 degrees - a full 13.1 degrees below the monthly average. It also snowed a lot that month, with 26 inches of snow reported.


#7 - CHICAGO RECORD RAINFALL
Over six inches of rain fell in Chicago on July 23, 2011 - the all-time greatest daily rainfall total on record. The water flooded homes and cars were stranded across the city. The Dan Ryan was even covered with water! What made this event more remarkable was that most of the 6 inches of rain fell in just a three-hour window, which led to extreme flash flooding.

# 6 - NOVEMBER 2013 WASHINGTON TORNADO
Twelve days before Thanksgiving on November 17, 2013, over 25 tornadoes reported across the state of Illinois and 30 reported in the state of Indiana. The largest, an EF-4 tornado with winds to 190 mph, hit Washington, Illinois. It left a trail of destruction, killing one person and nearly wiping out the whole town. The EF-4 tornado that tore through Washington left $935 million in damage.

#5 -NAPLATE OTTAWA TORNADO VIDEO
This was the first significant February tornado outbreak in the history of Northern Illinois. On February 28th, 2017, 10 tornadoes touched down in Illinois, including an EF-3 with winds around 155mph that struck Ottawa and Naplate. The video of the tornado is breathtaking. In the Ottawa cell, hail the size of baseballs fell. These tornadoes turned out to be deadly, killing 2 people, injuring 14 and leaving a long path of destruction in their wake.

#4 - MARCH RECORD HEAT VIDEO
From winter tornadoes to record spring heat, let's go back to 2012 for the record March heat wave. From March 14th to March 22nd it felt like summer, breaking or tying record highs for almost two weeks. How warm was it? For eight of those 10 days, it was over 80 degrees. That may not seem too warm, but remember that our normal high for that time of year is in the lower 40s.

#2 - 2015 TORNADOES
In 2015, there were numerous, violent tornadoes. Because of that, we've combined two large tornado outbreaks that happened into our Number 2 spot. The severe weather season got off to a quick start, with the first outbreak occurring in April. On April 9, 2015, 11 tornadoes touched down in Illinois. Six of these tornadoes were spawned from the same supercell, with one of those tornadoes being an absolute monster EF-4 with winds up to 200mph. This tornado was on the ground for 30 miles, from Franklin Grove to Fairdale. This tornado took two lives.

Two women were killed and several others were injured, on seriously, when a tornado ripped through the town of Fairdale, Ill.

The second outbreak occurred on June 22nd, 2015 when a dozen tornadoes touched down in northern Illinois, with 10 forming from one supercell. One of the 10 was rated an EF-3 and had winds up to 160mph. These winds hit both coal City and Braidwood. Thankfully, no one was killed, but 11 people were injured.

#1 - GROUNDHOG DAY BLIZZARD
The historic "Groundhog Day Blizzard" takes #1 on our list for crippling the entire region for two days in February of 2011. Who can forget the scene on Lake Shore Drive as the heavy snow shut down the drive with many stranded in their cars. People boarded CTA buses to stay warm until they could be rescued. Winds along the lakefront gusted to 70mph, almost hurricane strength. When all was said and done, 21.2" of snow officially fell at O'Hare, but with all the blowing and drifting, its likely the true number is higher. Still, that snowfall is good for the 3rd highest of all time, dating back to the late 1870s when record keeping began. With the historic precedent and lasting impact felt by this storm, the ABC 7 Weather Team deems it worthy of the #1 spot on our list of the top 10 weather events of the decade.