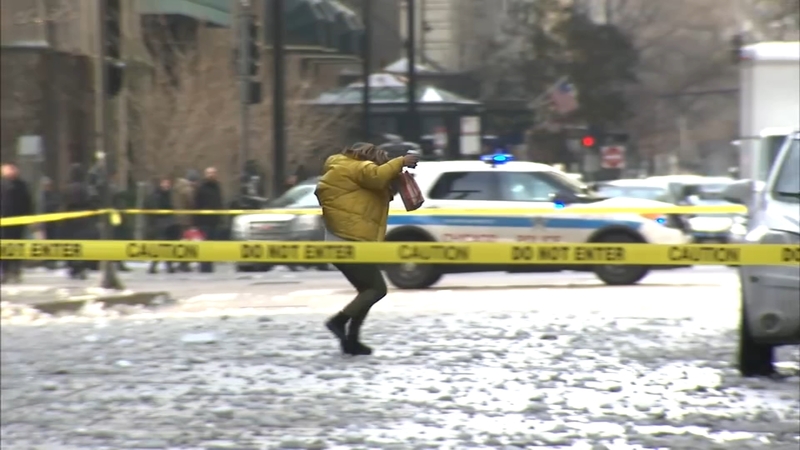 A large piece of metal was seen dangling from a downtown Chicago high-rise near Madison and Wells Thursday afternoon.

Late Thursday afternoon, a large piece of metal was seen dangling from an upper floor of a high-rise near Madison and Wells in the Loop.

Large chunks of ice cascaded down from the top of the former John Hancock Center located at 875 North Michigan Avenue in the city's Gold Coast neighborhood.

A Chase bank sign at the building's base was damaged. Snow and ice littered the sidewalks and streets. Tourists from Arizona, Paige Weisz and Kevin McDowell, were intrigued by what they saw.

"Sheets of ice and snow falling from the ledge," Weisz said.

"We have a hotel room and we have a window facing this street. I look out the window and we see large chunks of ice just falling. I thought it was kind of strange because I thought it was going to be more like snowflakes. I was like, 'That's a large snowflake," McDowell said, laughing.

Franklin Street was closed between Madison and Washington streets to both vehicles and pedestrians in the Loop, but was later reopened to traffic. Pedestrian walkways remain closed.

Several streets in Chicago's Loop were temporarily closed Thursday to protect pedestrians and drivers from falling ice and snow.

Falling ice smashed the back window of a vehicle Thursday morning. The driver heading north on Franklin next to the Willis Tower when it happened. The driver was shaken up, but not hurt.

Emergency workers warned people to look up and stay alert as they traveled through the downtown area on Thursday.

Roads across the Chicago area were slick Thursday morning from some overnight snow.

The ABC7 Stormtracker checked out conditions on the Edens Expressway, where there were some slick spots, but traffic was moving smoothly.

Overnight, the conditions led to some crashes, including a car sliding into a pond in the 6100-block of South Cornell Drive near the Museum of Science and Industry.

The driver said the slick conditions caused him to swerve off the road and into the water. Authorities said he is doing okay.
LIVE TRAFFIC: Check the latest conditions on our traffic map