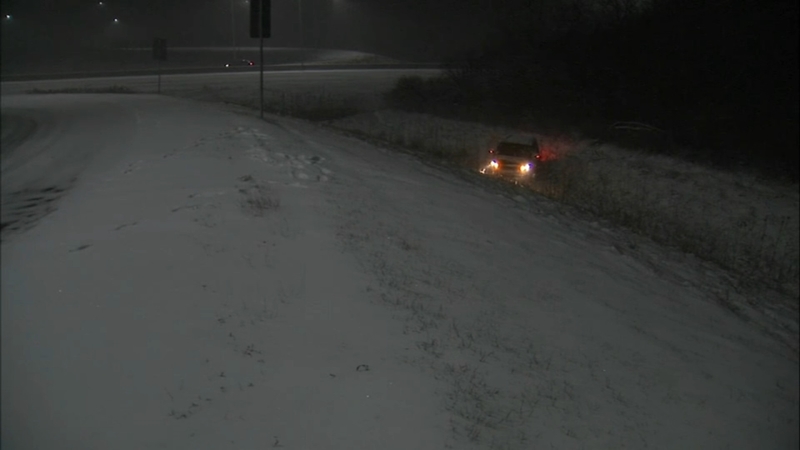 CHICAGO (WLS) -- The Chicago area is beginning the new year with a winter storm that brought upwards of 5 inches of snow in some places, making a mess of roadways.

As of 7:20 a.m. Sunday, over 4 inches of snow had fallen in the city, the National Weather Service said.

To the north, Woodstock had the highest total - 5.4 inches.

In response to the storm, the Chicago Department of Streets and Sanitation said it's deploying about 300 plows. The salt spreaders will focus on addressing ice and snow along the city's arterial routes and Lake Shore Drive, the department said in a release.

Just before 8 a.m., the plows transitioned to clearing residential streets. Chicagoans can visit chicagoshovels.org to see which streets are being plowed.

But the streets are still slick in some areas.

Chicago Fire Department shared some safety tips on their Twitter for those shoveling out snow. They recommend to not eat a heavy meal or drink alcohol before shoveling. They also said it's best to use a small shovel, as lifting heavy snow can increase blood pressure.

If you are out shoveling today please follow these safety tips 2-1-30. pic.twitter.com/9VSfgdBeCa

Also, know the dangers of hypothermia, as well as the signs of a heart attack. Make sure to consult a doctor if you have a medical condition.

Several crashes took place as the snow fell, and a cold front coming in has made the roads even more slick for drivers.

A driver lost control on an exit ramp in north suburban Gurnee, heading from westbound Interstate 94 to Belvidere Road.

A mother and three kids were OK, but they had to wait three hours for a tow truck.

"Hopefully, it doesn't get much worse in the meantime," added Ben Clay, who was driving to Wheaton. "Take it a bit slow. Leave some distance between the guy in front of you."

Flights were also disrupted. As of about 6 a.m. Sunday, O'Hare had over 500 cancellations, and Midway had 60.

And parts of the lakefront are closed because of the snow and high waves. The Lakefront Trail is closed at Oak Street to Ohio Street and Fullerton Avenue to North Avenue. Access to the underpass at Chicago Avenue is also closed.

"I was like, let me make a run and as soon as I looked out the window I said maybe not," said Chicagoan Rob Robinson.

The Chicago area is beginning the new year with a winter storm that is expected to bring upwards of five inches of snow in some places.

Early 2022 brought snow and ice, blanketing the city as drivers tried to make it to their destination with little concern.

"It's pretty windy, but as long as you're prepared and have layers on, it's not too bad," said fellow Chicagoan, Kendall Junger.

Much of the snow had wrapped up by 6 a.m. Sunday, but a band of lake effect snow impacted the city and parts of Lake County, Illinois, Cook County and even eastern DuPage County.

"I miss it. I like having all four seasons, so it's nice to kind of feel a little bit like the holidays have finally started even though they're ending," Junger said.

Winds will stay gusty as temperatures fall into the teens, so expect roads to remain in poor condition.

Between 6 a.m. and 1 p.m. Sunday, the lake effect snow band will shift into northwest Indiana before moving into southwest Michigan in the afternoon.

The Chicago area saw its first measurable snow of the season Tuesday after one of the longest snow droughts in the city's history.