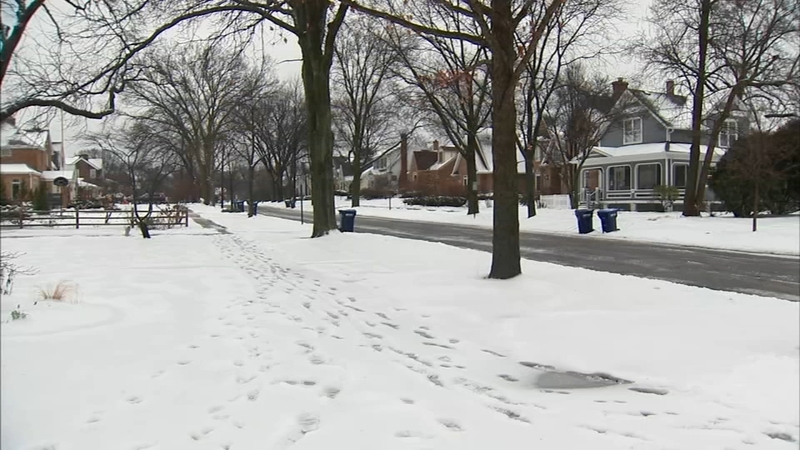 Snow overspread northern Illinois late Tuesday afternoon and piled up quickly in the suburbs as snow fell at a rate of 1 to 2 inches per hour in some areas.

The heaviest accumulations are expected to be in the northwest suburbs, where some parts of McHenry and DeKalb counties could see as much as 8 inches of snow.

Snowfall amounts upwards of 4 inches are possible north of Interstate 88, but only about 1 to 3 inches are expected across the south suburbs and northwest Indiana.

Between 9 p.m. and 3 a.m., the snow began to mix with sleet and freezing rain. Ice accumulations of up to two-tenths of an inch are also possible just inland away from the Lake Michigan shore.

After 4 a.m., the precipitation changed to all rain for much of the area as temperatures rose above freezing.

Total snow and sleet accumulations of 1 to 4 inches are expected, with the highest snowfall amounts expected along I-88 and north. Areas in the city could see about two inches of snow. 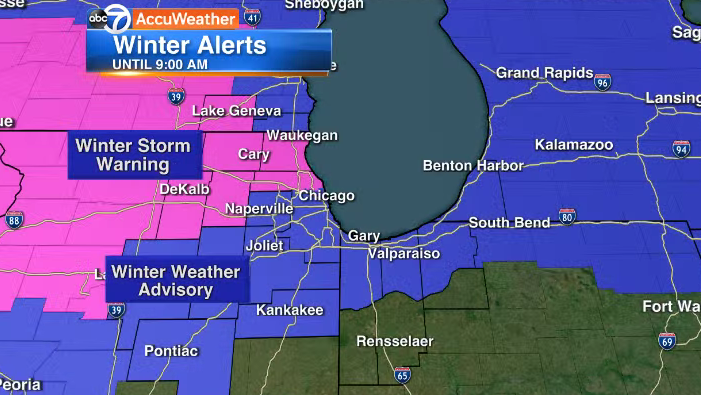 The first significant snowfall of winter left a trail of crumpled metal as spinouts and crashes littered roadways. The snow arrived ahead of the evening rush, with the north and northwest suburbs in the bullseye.

"I saw four or five already, Eric, so like people hitting the barrier and everything," driver Marc Groen said. "A couple messed up cars."

In Lake and McHenry counties, high winds created near-white out conditions. At one point, traffic near Gurnee ground to a halt.

In the 5300-block of South Hyde Park Boulevard on Chicago's South Side, a CTA bus slid into a parked car, officials said.

At the Hinsdale Oasis along Interstate 294, heavy snow prompted many truckers to pull over and wait out the storm.

The Illinois Tollway had its full fleet of nearly 200 snow plows trying to keep up, but it's a tough task. Drivers are being reminded to take it slow and, if possible, to stay off the road.

Illinois State Police were apparently inundated with so many calls that they asked drivers involved in a crash without injuries to exchange information with the other driver and file a report at a later date.

"We enjoying having snow, but this one, not this way, because this way it's so scary," Evelyn Okoubi said.

The roads and sidewalks remained slick into Wednesday morning, as freezing rain continued to coat the ground.

A snow plow crashed into a Midway airfield wall about 3:20 a.m. The driver was taken to Holy Cross Hospital with minor injuries, Chicago police said.

Drivers were told to plan for extra time in their morning commutes.

"Just get off to the side, let 'em go, you know, we will see them in a ditch, you know, I don't care what they do," Tom Schletz said. "I'm gonna take care of me, and I'm getting home safe to my family."

The Wednesday morning rain is not expected to melt all the snow, but it should help the roadways, ABC 7 Chicago meteorologist Greg Dutra said.

Road crews in Barrington have already been deployed as the northwest suburbs brace for heavy snow overnight.

Road crews in Barrington focused on the village's main arteries. Barrington has about 12 trucks in its fleet.

Public Works Director Jeremie Lukowicz said their crews were ready for this months ago.

"Prior to winter even starting - back in October, November - we start checking all our machines, making sure everything is ready to be deployed," Lukowicz said. "Having this occur overnight allows us to hopefully get everything clean before they have to head out the next morning."

Given the fact that we are in a pandemic, Lukowicz said they require each crew member to sanitize their area before and after they get into their truck. In addition, the trucks are also cleaned in between shifts.

The first significant snow of the season has arrived in Chicago... finally.

Chicago's Department of Streets and Sanitation deployed 287 snow vehicles to respond to snow Tuesday evening and into the morning. Salt spreaders focused on keeping the city's arterial routes and Lake Shore Drive passable until about 6:30 a.m. They then turned to residential streets.

Some power outages are possible due to the combined effects of wet snow accumulation, some icing and wind gusts up to 30 mph.

O'Hare and Midway airports have experienced only minor delays due to the storm.

In Western Springs, the snow was heavy, wet and hard to shovel, quickly creating slush on roadways.

"I like it when I'm outside the first day when it's nice, but I hate driving in it," Anthony Schletz said.

"This was incredibly heavy. I have a snow blower and it had trouble blowing it because it was so wet, so I was really careful with the shovel itself," he said.

While some may be excited to see the first big snow of the season, others had hopes winter would just forget about Chicago.

"I'm way beyond Chicago winters. If I never have snow again, I think I'd be OK," Brandt said.

But in Chicago's West Loop, some still braved the weather Wednesday to eat outside.

"Considering the weather is so bad and stuff it still works out because it is a pretty decent enclosed space, not like you're out in the elements," Roland Ronquillo said. "It is just a minor inconvenience. As Chicagoans we are pretty resilient people and we are used to deal with adversity and toughness and we are still trying to live our life as best as we can."

But Ronquillo agreed some hot coffee could help take the edge off an icy morning.

"Believe it or not, we are having burgers in the morning, which is kind of strange," he said.