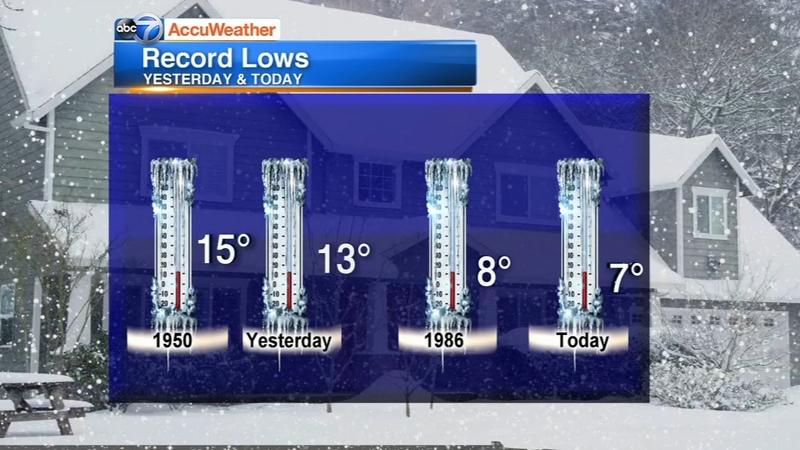 The official low for Tuesday at O'Hare Airport was 7 degrees, breaking the previous record low for November 12 of 8 degrees - the coldest temperature ever recorded so early in the season. A record low temperature was also set on Monday, with temperatures dipping to 13 degrees.

SCHOOL CLOSINGS: Check out our full list of school closings

Commuters at 95th Street and the Dan Ryan Expressway were chilled to the bone as record snow gives way to record cold.

A day after snow and ice led to more than 1,000 flight cancelations at Chicago's airports, things are returning to normal Tuesday.

People traveling to work Tuesday morning said they are freezing despite their best efforts.

"It definitely feels like it is cutting my face. I don't have anything to go over it so I just do the best I can," said commuter Brian Johnson.

"It's Chicago, so you just learn to deal with it," said commuter Archie Hunt.

"It's so cold that it's burning my face," said Lattea Scates. "I work downtown overnight so I am just getting off this morning and came out to a mess."

The cold has left sidewalks encased in ice and many are worried about falling.

"I'm pretty prepared for it, just gotta get better boots or something so I don't slip," said Brooke Howard.

Meanwhile, teenagers at a South Side high school braved the raw weather, which to many, came too soon.

"I mean it's like bitter cold out here, but I don't know why it's so cold, it's not even Thanksgiving yet. It's crazy," said Demario Greer.

While some are dreaming of warmer days, Rosetta Jones says she loves the cold.

"This is my kind of weather," she said. "Because I was born in December."

"It came on us like a ton of bricks," said commuter Patrick Green. "I have to get some warmer clothes."

These are the coldest temperatures ever recorded in all 50 states.

The cold comes after some parts of the Chicago area received six inches of snow Monday and more than 1,000 flights were canceled at O'Hare and Midway.

Flights are slowly getting back in the air Tuesday morning, with 100 flights canceled at O'Hare and five at Midway as of 11:30 a.m.

On Monday, the poor visibility and strong gusty winds made for less than ideal conditions. At one point Monday night, 1,276 flights were canceled at O'Hare and 78 flights at Midway. Delays at O'Hare are averaged over an hour.

Some people were left stranded here at the airport because they couldn't get rooms at nearby hotels. Others were lucky and managed to stay close while they waited.

"I stayed the night but it was very difficult to get a hotel and they were very filled up so I ended up staying in Skokie last night," said stranded passenger Betsy Hopkins. "But hey, I'm heading home today, it's good. It's all good.

Tuesday morning, delays are less than 20 minutes at O'Hare and Midway.

The city of Chicago has street sweeping operations for the rest of the week. The Department of Streets and Sanitation said crews will start sweeping again on Monday according to the regular schedule. They'll make up the missed days after the scheduled season ends, weather permitting.

The early deep freeze the Chicago area is feeling this week has those who help the homeless rushing to gather resources to help them cope through the frigid temperatures.

Caught off guard by the sudden and early arrival of winter weather, Bobby Lopez is among the dozens of homeless men and women trying to stay warm as temperatures plunge into the single digits.

"I'm trying to use propane gas to keep me warm," Lopez said. "Should it go below zero, I hope someone can help us completely go inside somewhere, so I don't have to deal with getting frostbitten or catching pneumonia," Lopez said.

Strangers, along with the concerned, like Barbara Rucci are taking action to help by donating supplies though the charity Wrapped in Love.

"Its basic things; its gloves, hats, tents, propone tanks, anything that can be donated," Rucci said.

Susie Barrto, who founded the charity seven years ago, said providing the supplies is a matter of life or death.

"I absolutely have to be proactive about bringing them the supplies they need because they will die," Barrto said.

The cold weather drove some to the Pacific Garden Mission Tuesday afternoon. They're expecting 300 more people than the usual 600 men, women, and children that they host a night.

While Pastor Phil Kwiatkowski says he can find space and food for all them, he may not be able to keep them warm when they leave.

"I guess where it does catch up by surprise, is the shortage of coats, socks, gloves, hats, we don't have enough of, and we would love to have more, Kwiatkowski said.

St. Sabina Catholic Church's service center is feeling the pinch too. Before the weather hit, the charity thought it was ready for the winter rush, but will now have to play catch up while gearing up for its Thanksgiving turkey giveaway.

"Now seems like we're going to have to do it simultaneously and not no necessary be ahead of it, like catching up, said St. Sabina Social Service Director Fitz Crann.

It's little comfort to Juan Matchain, who has been homeless for one year.