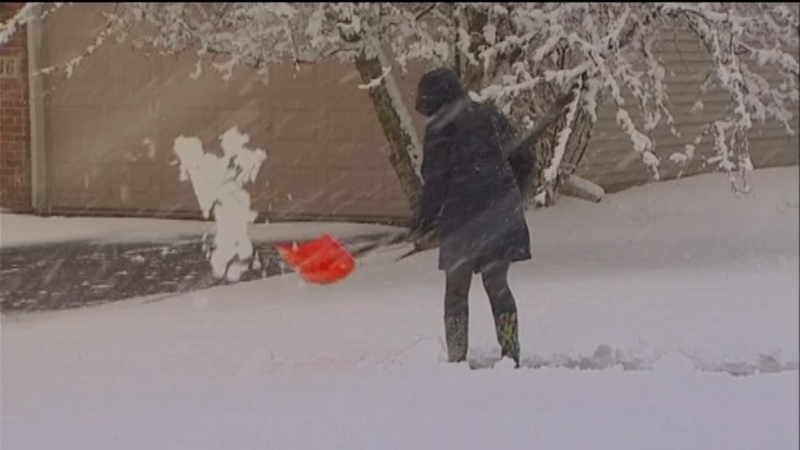 CHICAGO (WLS) -- A historic mid-April snow storm on Sunday dropped up to 7 inches in parts of the Chicago area, canceling more than 1,000 flights and making roads slushy.

This is the area's second biggest snow storm so late in the season, and the snowiest April 14 on record.

The north and west suburbs got the most snow - Huntley got 7.5 inches and O'Hare airport got 5 inches. Some areas just got a dusting.

A snow storm dropped up to 7 inches in the Chicago area on Sunday. This is the most snow the area has seen this late in the season.

Most of the Chicago area got between 2 and 6 inches. Snow was starting to diminish in the late afternoon.

A Lakeshore Flood Advisory was issued until 10 p.m. Sunday.

Your snow forecast in pictures:

Temperatures were in the mid 30s with a wind chill in the 20s.

About 1,080 flights at O'Hare and Midway airports were cancelled Sunday due to the weather conditions. At about 4 p.m., O'Hare reported 939 canceled flights and a 54-minute average delay. Midway reported 140 cancellations with a 32-minute delay.

Potent weather system continues to move away from Missouri and towards Illinois/Michigan. So far snow reports between Springfield, MO towards Chicago have been between a T to 3-4 inches. Use caution if traveling today. pic.twitter.com/wCaWGLycsK

Sunday's Buddy Walk was also cancelled, as well as the Chicago Cubs games against the Los Angeles Angels.

Both are expected to be rescheduled for another date.

Today’s #Cubs-Angels game has been postponed due to the forecast for inclement weather throughout the day.

The makeup date is yet to be determined. Fans are encouraged to retain their tickets to use for the rescheduled contest. No ticket exchange is necessary. pic.twitter.com/CWNLHM9uZb