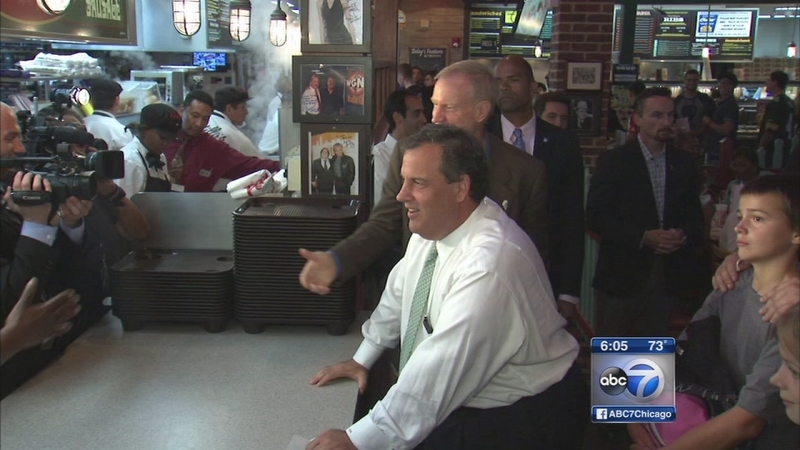 CHICAGO (WLS) -- Bruce Rauner is using some republican star-power to raise money in his race for Illinois governor. Chris Christie, the governor of New Jersey is in Chicago tonight for a Rauner fundraiser being held at the Hilton Hotel on Michigan Avenue

Christie is also part of Republican Governors Association which donated $2.5 million to the Rauner campaign.

Despite his admitted weight issues, Governor Christie held a Chicago news conference at the downtown Portillos. The RGA chairman joined rail-thin Bruce Rauner as the two ordered a late lunch with Christie opting for the jumbo chili cheese dog with a vanilla shake.

Most of the questions concerned assault weapons. Christie vetoed a New Jersey bill to limit the size of magazines and the Quinn campaign is using an internet ad to attack Rauner, who said during a debate last spring people should be able to own assault weapons and choose to use them legally.

A spokeswoman for the Democratic Governors Association is following Christie as the governor promotes Rauner's candidacy in Chicago:

Tonight Christie will attend another fundraiser, this one for Florida governor Rick Scott, also held here in Chicago.