WLS
CHICAGO (WLS) -- ABC 7 CHICAGO will highlight the rich culture and traditions of Chicago's Hispanic community during Hispanic Heritage Month, September 15-October 15. ABC 7 will celebrate Chicago's diverse community with special news reports; the broadcast of the The 26th Street Mexican Independence Day Parade; a half-hour edition of THE Ñ BEAT; and a series of vignettes.

The 26th Street Mexican Independence Day Parade, sponsored by the Little Village Chamber of Commerce, was hosted by ABC7's Stacey Baca and Cesareo Moreno, chief curator of the National Museum of Mexican Art. ABC7's parade broadcast, in the heart of the Little Village neighborhood, illuminates Mexican culture and is considered one of the most colorful parades in Chicago.

More than 200,000 spectators were treated to mariachi bands and floats including the ABC7 Chicago float, where members of the ABC7 Eyewitness News team - Tanja Babich, Rob Elgas, Michelle Gallardo, John Garcia, Leah Hope, Will Jones and Roz Varon - rode and greeted those watching along the parade route.

This year's Grand Marshal was Juan Valentin. Born in Guadalajara, Mexico, Valentin has recorded dozens of albums and has received five Grammy nominations. He has also appeared in many movies in Mexico. Currently, Valentin is touring the USA as an ambassador of mariachi music throughout the world.

Throughout September and October, ABC7 will celebrate Hispanic Heritage Month with vignettes spotlighting some of the influential and talented artists and business persons who will be featured in the upcoming September 24th edition of THE Ñ BEAT.

The Ñ Beat: September 24, 2017
The Ñ Beat is an Emmy-award winning ABC7 show that turns the spotlight on Chicago's vibrant Latino community.

On this Hispanic Heritage Month edition, Miguel Cervantes, star of the hottest show in town, Hamilton, shares a very personal story about his toddler's struggle with a rare form of epilepsy. Miguel and his wife Kelly have been by their daughter Adelaide's side as she suffers dozens of seizures each day. Cervantes talks about how the high-profile platform he enjoys in Hamilton has helped raise awareness and funds for CURE (Citizens United of Research in Epilepsy.)

Rachel Castro was just 17 when she suffered a massive stroke at her after-school job. Her determination through tough physical, occupational and speech therapies yielded results and she was able to get her life back. Rachel talks openly about her harrowing ordeal and how she's using this second chance to speak out about stroke warning signs and symptoms. As a neuroscience major at the University of Illinois at Chicago, she has selected a career path to help people like herself. She even has aspirations of attending medical school.

Funded by the National Museum of Mexican Art, this year Yollocalli is celebrating 20 years of mentorship. Through this youth initiative, young adults receive instruction in all forms of art, from mosaics to murals. They even have their own radio station where kids hone their broadcasting skills. THE Ñ BEAT checks out all Yollocalli has to offer.

Next up, she knows her way around a kitchen because she has worked in her parents' Taqueria since she was 10. But now she is the Executive Chef and owner of Mi Tocaya Antojeria in Chicago's Logan Square. Her culinary talents have earned rave reviews from Chicago food critics and the moniker, "Mexican Marvel." Diana Davila Boldin shares her story of success, her Mexican heritage, and the special dishes she serves up from her first restaurant, Tocaya Antojeria.

The Ñ Beat and The 26th Street Mexican Independence Day Parade will be available on-demand at www.abc7chicago.com. Cathy Karp is the producer of the parade. Rubye Wilson and Holly Grisham are the producers of THE Ñ BEAT.
Report a correction or typo
Related topics:
community & eventslittle villagelatin heritage monthabc7 specialcommunity
Copyright © 2020 WLS-TV. All Rights Reserved.
LATIN HERITAGE MONTH 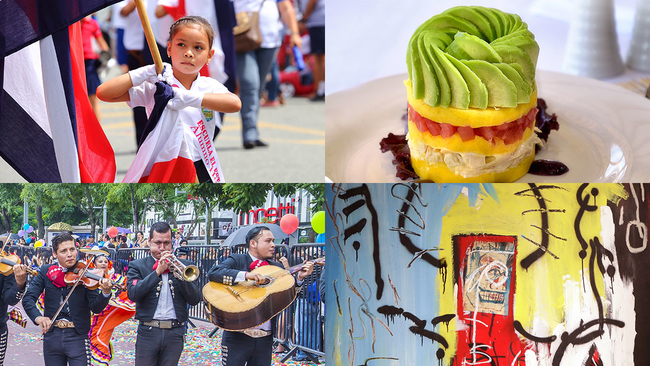