2 CPD officers shot in Back of the Yards released from hospital; AR-15 recovered

Both of the undercover Chicago police officers who were shot in the city's Back of the Yards neighborhood were released Wednesday from the hospital.

CHICAGO (WLS) -- Both of the undercover Chicago police officers who were shot in the city's Back of the Yards neighborhood were released Wednesday from the hospital.

Chicago Police Superintendent Eddie Johnson said the officers, one of whom may be the son of a deputy chief, were doing "quite well." The unmarked, gray tactical van carrying the cops was riddled with bullets from a high-powered rifle, an AR-15, Tuesday night.

A special prayer at the 9th District, where both officer work, for both the injured officers and their families was held Wednesday.

"It's a miracle they are coming back home, and we're praying for their quick recovery," said Rafael Yanez, Immaculate Conception Church.

The church members are also reaching out to those firing guns on the city's streets.

"Come to us, talk to us about whatever is going on within you. So we can resolve whatever issue is going on," said Father Manuel Dorantes, Immaculate Conception Church.

Police said the officers and their families are being provided with additional security in light of information indicating they were targeted.

"Families don't know if their spouse, if their father, their mother is going to be coming home from the job. That's always the danger," said Chicago Fraternal Order of Police President Kevin Graham.

Graham said the officers have been on the force for some time, but did not disclose their ages or genders.

"Make no mistake about it. We're going to catch them. We're going to get these individuals responsible. Listen, if they would fire at police officers like that, then they have no thought process in terms of firing at other citizens of this great city," Johnson said.

"We have some promising leads. As a matter of fact, we have a few persons of interest that we're talking to right now, so we'll see where that leads us," Johnson said.

Police said around 9:10 p.m. Tuesday, the two plainclothes officers from the 9th District were conducting a gang investigation following an incident earlier in the day near West 43rd Street and South Ashland Avenue when one, possibly two, cars pulled up and the people inside opened fire on their gray unmarked tactical van.

Investigators appear to believe the officers were being followed in the moments before the shootout.

"We're still trying to sort through the details, there are three persons of interest at this time. Who came off the Back of the Yards street," said 15th Ward Alderman Raymond Lopez.

The officers were able to return fire, but it's unclear if they hit anyone. The desperate radio calls for help were released Wednesday.

Johnson rushed to the hospital to visit with the officers Tuesday night. Mayor Rahm Emanuel, Alderman Patrick Thompson (11th Ward) and Alderman Lopez also came to see them and speak to their families.

Hundreds of officers flooded the area in the hours after the shooting, conducting a massive manhunt. A few detectives canvassed the neighborhood Wednesday. It's mostly industrial. Ashland Cold Storage sits near the old stockyards and has several surveillance cameras mounted on the building. It's unclear what they may have caught on video.

Investigators said two weapons were recovered from a vehicle seized by police that may be connected to the shooting. The AR-15 was one of those weapons. Guglielmi said ballistics and the trace on the assault rifle have been expedited.

Now there are calls for police officers to carry assault weapons themselves for aldermen and the new head of the FOP.

"It's for their own protection and for the protection of the people of Chicago," said 14th Ward Alderman Ed Burke.

Back of the Yards has been embroiled in a violent gang war for several years now, which has recently been escalated by the use of assault-style rifles. One resident told ABC7 Eyewitness News the gangs openly brag about it.

"How are they getting these guns? As one young man told me, it's no problem to toss a gun because we can get another just as easily," Keith Kysel said.

Emanuel tweeted Wednesday morning that the shooting was a "frightening reminder" of the danger officers face. He also thanked them for their service.

"We are praying this evening for the two officers shot tonight and their families, and for the safety of those officers who are continuing the search for the offenders. We are in close communication with the 9th District Commander and officers, and we urge anyone with any information regarding this shooting to come forward immediately to ensure that the perpetrators are brought to swift justice. While the details of this horrific incident remain unclear, what we know for certain is that the gun violence that has terrorized Back of the Yards and communities all across our city must end."

The Independent Police Review Authority is investigating the incident, including comprehensive use of force. The CPD is cooperating. Per department policy, the officers involved in the shooting will be placed on routine administrative duties for 30 days. 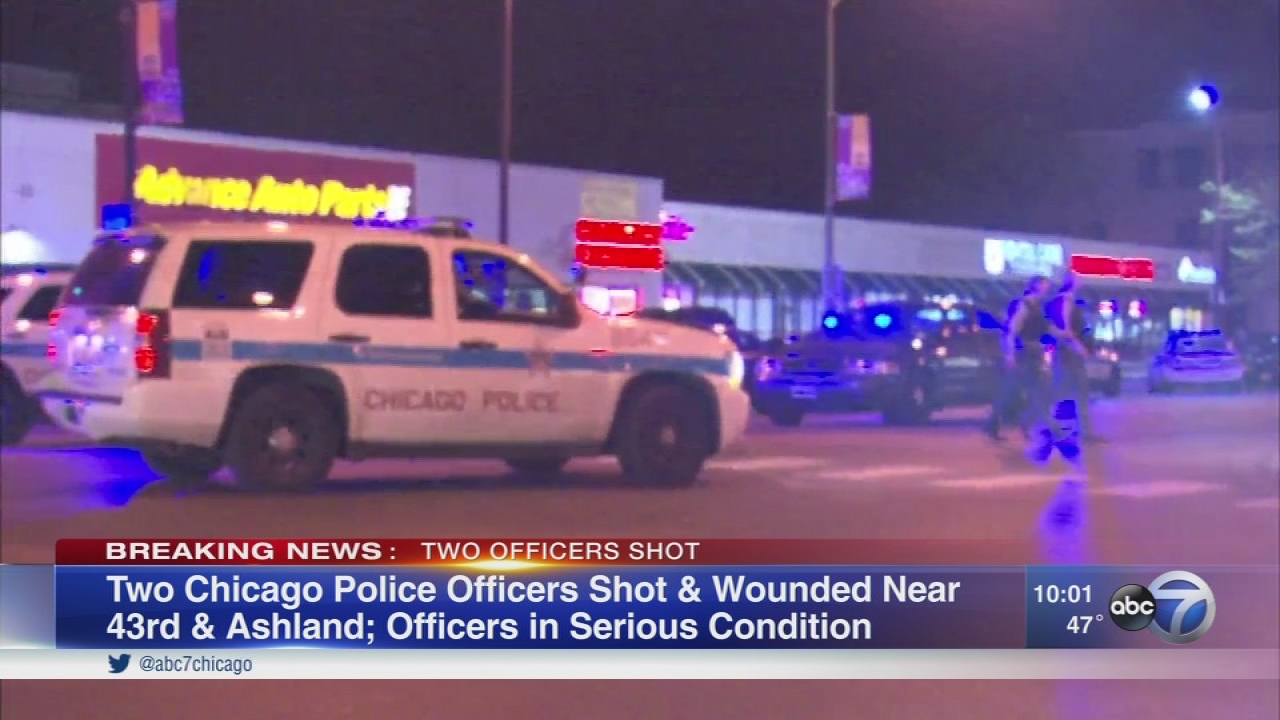 2 CPD officers shot in Back of the Yards, manhunt underway

Man shot in head, killed at stop sign on South Side: Chicago police