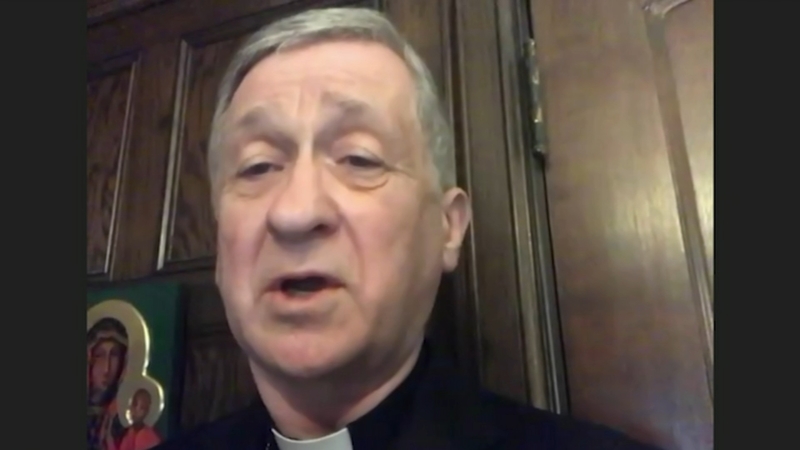 In an interview with ABC7 anchor Alan Krashesky, Cardinal Cupich says his focus in the days before Easter Sunday is "making sure that people have what they need, spiritually but also in terms of social good."

"Let's be honest, we are vulnerable and we are helpless in this moment and that is, however, where our common bonds with each other are forged. We're all in the same situation, no one is exempt in this moment and I think that that human solidarity is something we need to rely on in this moment," Cupich said. "We're working with a lot of folks now through Catholic Charities to make sure that people are fed, there are other people not left behind" he continued.

Cardinal Cupich called the disproportionate impact of the virus on the African American community in Chicago a "tragedy" that is "revealing the soft underbelly of the healthcare system that has not worked for all."

"I hope that we're stronger in our faith but I also hope that we're finding a new sense of unity among ourselves as a country and as a people," Cupich said. "We should not squander the gains, the hard fought gains that we have had in these days of bringing ourselves together in unity. We need to think about stuff, things, like what do we do with healthcare, universal health care? Why is it that there are certain populations that are suffering more than others?" he continued.

Cardinal Cupich says dealing with a pandemic creates a historic link to the Jewish observance of Passover.

"The Passover story was about people staying in their homes and letting the deaths pass by and then they went out into a desert land wandering around in unfamiliar territory, but in many ways we're like those Passover people this week," Cupich said.

"We wanted to do this way of the cross for the whole city to come together in prayer and let everyone know that we all have a part and praying for the end of this epidemic, it also a part in being socially responsible and staying in our home. The best thing we can do now is to stay in our home and allow this plague to pass us by," Cupich said. Cardinal Cupich has been celebrating mass online and his Easter Sunday mass from Holy Name Cathedral will be broadcast on ABC7 this Sunday at noon.

In a time that has seen many religious traditions turn to online services to connect with the faithful, Cardinal Cupich has strong words for those he calls "selfish" for not keeping social distancing or even religious groups who still insist on meeting in person.

"God doesn't allow us to have a religion into a magic formula where we say a prayer and think things are going to go away. We have to take responsibility for our actions and we have to make sure we keep each other safe," Cupich said.

Cardinal Cupich says they've trained 24 priests to minister to those who are infected by COVID-19, coordinating with hospitals and authorities to ensure safety.

"There's a double heartache of losing a loved one and then not having the rituals by which they were comforted and the gathering of friends to be supportive of them," Cupich said.

He urged religious and city leaders to make a plan for comforting those impacted by the virus in the coming months.