Coronavirus danger escalating behind bars at some Illinois prisons, jails 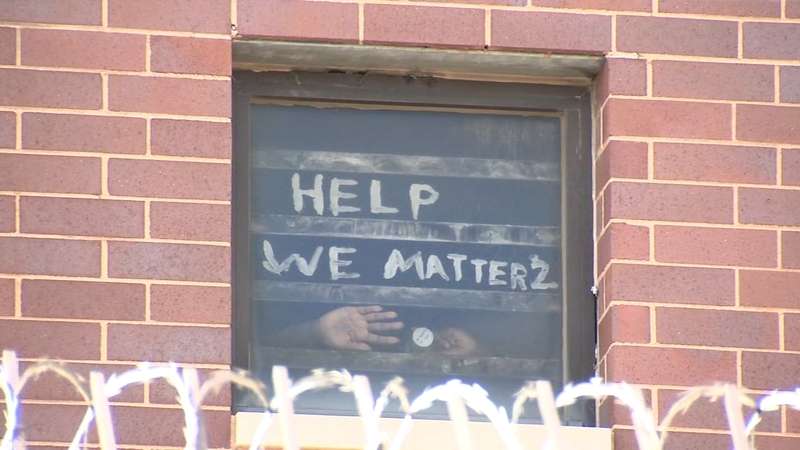 CHICAGO (WLS) -- There is a growing medical and humanitarian crisis inside some Illinois jails and prisons from the coronavirus.

The escalating danger behind bars continues as the total number of prisoners and prison staff infected with COVID-19 in Illinois is approaching 700 across federal, state and local facilities.

Most of the cases are still at Cook County Jail, where the number jumped 10% on Friday.

The facility is home to 4,435 prisoners. Pleas for help were painted in several of the building's windows Friday. One hand-painted message from inside read, "Help we matter 2."

Another one asked for a mass release from inside amid the coronavirus outbreak.

One detainee, who spotted the I-Team, tapped on the jail glass, pressed his palms against the window, and then formed the symbol of a heart with his hands.

There are similar concerns at the federal lockup in downtown Chicago. The Metropolitan Correctional Center currently houses nearly 650 inmates, all on lockdown.

According to figures from the U.S. Bureau of Prisons, six staff members at the MCC Chicago are infected with COVID-19.

Nationwide more than 500 staff and inmates have tested positive and nine federal prisoners have died across the country.

Southwest of Chicago at Stateville Prison, Illinois corrections officials face as similar dilemma. A protest caravan rolled past the facility Friday as the demands for the release of medically-challenged prisoners grew louder.

Nearly 2,700 prisoners are on lockdown with authorities reporting 119 inmates have tested positive for COVID-19, along with 69 staff members.

Among them is 42-year-old Terrence Polk, doing time for a Chicago murder that happened 24 years ago.

In a letter, Polk asked Illinois Governor JB Pritzker for "help to be released on House Arrest."
His fiancee Angela Chester said they were working with an attorney to have his conviction overturned, but that effort is now on hold due to the pandemic.

Chester said they are worried he will catch the virus and die in prison.