Illinois COVID-19: IL reports 6,363 coronavirus cases, most since pandemic began, along with 56 deaths

"We have a real problem on our hands and people's lives hang in the balance," Gov. Pritzker says
WLS
By Will Jones, Eric Horng and ABC7 Chicago Digital Team 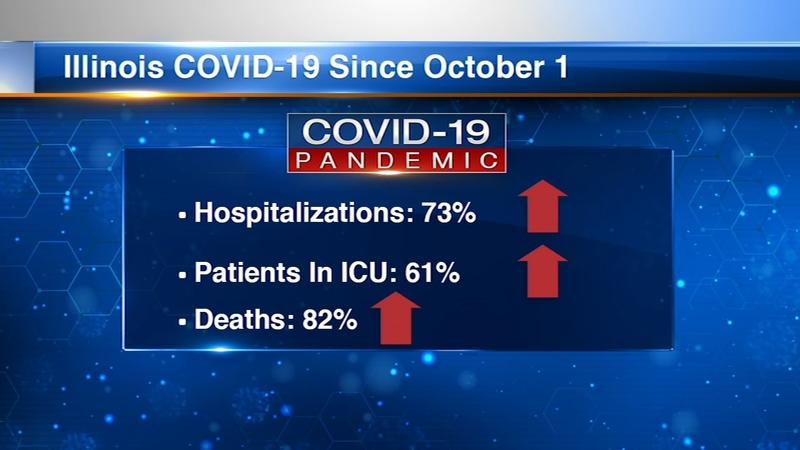 The number of new cases is the highest reported in a single day since the pandemic began.

"We have a real problem on our hands and people's lives hang in the balance," Gov. JB Pritzker said during Thursday's briefing.

Despite the rising metrics, many suburbs and restaurants are pushing back on Gov. Pritzker's new COVID-19 mitigation restrictions, with some even taking legal action.

"We've done all the necessary precautions. We've done everything that we can so that we can open safely and have jobs again, but that's being taken away from us again," said Clay Schoolman, a Lincoln Park restaurant worker who was laid off a day after the indoor dining ban was announced. "I just feel like he's using the restaurants as an excuse as a way to make it seem like something's being done."

But Gov. Pritzker insists the decision to ban indoor dining is backed by data.

"If you look at the literally more than a dozen international and national studies that have been done, you'll understand that bars and restaurants are spreading locations," Pritzker said.

While answering questions online, Chicago's top public health official Dr. Allison Arwady said contact tracing data since August shows 64% of people who tested positive had been to a bar or restaurant in the two weeks before diagnosis. But is that where they got infected?

"When you have a widespread community outbreak like we're having, unfortunately that level of precision is just not epidemiologically possible, much as I know people want it to be," Dr. Arwady said.

Governor Pritzker said he was hopeful earlier in the year that the state wouldn't see a second wave.

"I know that the vast majority of people in this state want to keep themselves safe, keep their families safe, keep their children safe, their neighbors and friends," Gov. Pritzker said. "But unfortunately, as these trends indicate, things are moving in a bad direction all across our state."

State health officials are asking people who have contracted COVID-19 to work with contact tracers to help stop the spread of the virus. Right now, tracers are stretched thin with the rise in cases. Local health departments are working to increase their staffing.

"We're hearing from the local health departments and the contact tracers every day that some people won't answer the phone, and if they do answer the phone, they don't give the answers to the questions," said Dr. Ngozi Ezike, director, Illinois Dept. of Public Health.

Doctors are warning people not to have Halloween parties this weekend. They say as the cases go up, your bubble needs to get smaller.

The total number of COVID-19 cases in Illinois now stands at 395,458 , with 9,675 deaths, the Illinois Department of Public Health reported.

As of Wednesday night, 3,030 people were hospitalized in Illinois with COVID-19, with 643 in the ICU and 269 on ventilators.

Governor Pritzker has also announced restrictions will go into place for Illinois Region 3 around Springfield starting on Sunday.

Governor JB Pritzker on Thursday provided an update on a program to help struggling businesses.

The governor said the state has already awarded more than $46 million in the second round of grant awards.

"Already, we've been able to help 1,200 businesses in this second round of Business Interruption Grants, totaling $46 million in funding for more than 340 communities in 79 counties statewide - including $19.5 million for restaurants and bars alone. That builds on our first round of Business Interruption Grants - $49 million to more than 2,800 businesses in over 400 cities and towns across 78 of our 102 counties," said Governor JB Pritzker. "This support is but one portion of the $1 billion in economic relief for business owners and communities that my Department of Commerce and Economic Opportunity has deployed in response to this pandemic - while simultaneously calling on the federal government to deliver more for Americans in every state, because this is not a crisis we can weather alone."