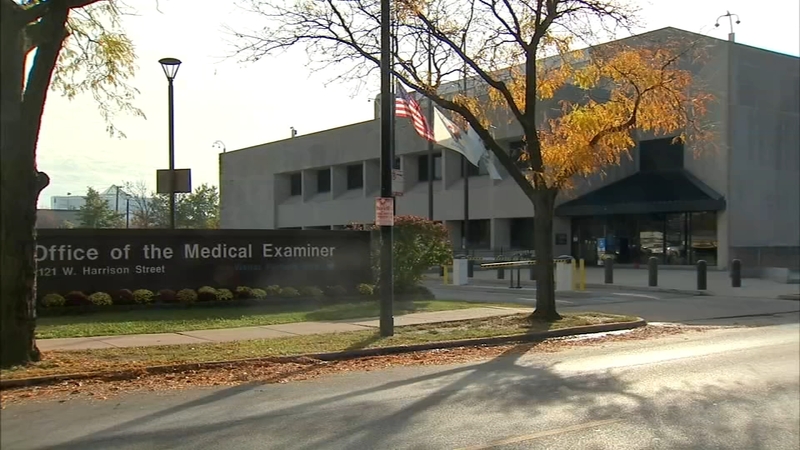 The number of deaths reported is the highest since June 17, when 87 deaths were announced.

Two of the deaths in DuPage County were of people who were relatively young, a man in his 30s and a woman in her 40s. The rise in deaths is being seen as a turning point.

At the Cook County Medical Examiner's Office, there is cause for concern. Last week saw 58 deaths from COVID-19 countywide - double the number in early-to-mid-September and the highest figure since mid-July.

"Our hope is that these numbers start to subside again, but only time will tell," said Natalia Derevyanny, spokesperson for the Cook County Medical Examiner's Office.

"We realized that this pandemic wasn't going to go away just because the, just because summer hit. And unfortunately, that is the case," Derevyanny said.

The rise in deaths comes as all 11 Illinois regions top 7% test positivity.

"The more cases, eventually you will get to more deaths, and so the spike in cases that we've been seeing over the last six weeks, yes, unfortunately it is turning into additional mortality," said Dr. Ngozi Ezike, director of the Illinois Dept. of Public Health.

A month after the FDA unveiled its plan to roll out a COVID-19 vaccine to the population free of charge once one is available, Gov. JB Pritzker released his own plan for Illinois.

A month after the FDA unveiled its plan to roll out a COVID-19 vaccine to the population free of charge once one is available, Gov. JB Pritzker released his own plan for Illinois on Wednesday.

"We are independently going to be looking at and ensuring that whatever it is that we distribute in the state will be safe," Gov. Pritzker said.

The governor decision to assemble an independent team of experts to ensure the eventual vaccine's safety is in line with what New York and California have announced in recent days. And while politics may be involved in that decision, infectious disease experts said the process will help to ensure people want to get vaccinated.

"It is really important because things have come through very quickly to make sure that it is evaluated," said Dr. Susan Bleasdale, UI Health medical director for infection prevention. "You have to look at this and decide how does this apply to my patient population? That has to be done at the state level."

The governor's vaccination plan is one that admittedly is low on specifics. There is still much that is not known, such as which company's vaccine or vaccines will be approved first, how many doses it will require, and how will it be stored.

But one thing was made clear: it will not be available to the population at large for at least several months after rollout.

"There will be limited doses that are going to be available when we get the first batch and then production will ramp up after that, but for that initial group it will absolutely be health care workers will be first," said Dr. Ngozi Ezike, director of the Illinois Dept. of Public Health.

Watch Gov. JB Pritzker give an update on COVID-19 cases in Illinois and announce new restrictions for some suburban Chicago counties.

Gov. Pritzker resumed his daily briefings at the Thompson Center Tuesday afternoon, where he announced suburban Kane, DuPage, Will and Kankakee counties will return to "heightened resurgence mitigations" on Friday.

The rollback was triggered when the four counties that make up Regions 7 and 8 reported rolling test positivity rates of higher than 8% for the third day in a row, Pritzker said. The positivity rate is an alarming 9% in Region 8 (Kane and DuPage) and 8.6 percent in Region 7 (Kankakee and Will).

Starting Friday, there will be no indoor service at bars or restaurants and all bars, restaurants and casinos must close by 11 p.m. Additionally, all gatherings will be limited to 25 people or 25% capacity, whichever is lesser. The restrictions will remain in place for at least the next 14 days, Pritzker said.

The move targeting bars and restaurants comes a day after Chicago officials said those businesses were not behind this latest surge of cases in the city. Instead, health officials in the city pointed the finger at home gatherings. But Gov. Pritzker insisted the move isn't arbitrary.

"We didn't pick it just because it sounds good or that we want to do it," Gov. Pritzker said. "It's because all the studies that have been done about bars and restaurants show that these are significant spreading locations."

"We're not going to not have people go to school. We're letting local health departments and school administrators decide what's appropriate for themselves with regards to school. And with regards to workplace, there are people who cannot work from home, who have to go to work, so the next thing we can actually act on is the bars and restaurants," said Dr. Ngozi Ezike, director of the Illinois Dept. of Public Health.

In Will County, this will be the third time indoor bar and restaurant service has been halted. Some business owners fear it will be their last. For Thayer Bros. Deli & Grill in Joliet, it's the latest setback in a year of struggle.

"I don't know if this is just another nail in the coffin. I see where places are closing left and right," owner Rick Thayer said. "I definitely feel like they're coming down heavy handed on us."

But will these mitigations - which were already imposed on Will and Kankakee counties back in late August - be effective? Especially as health officials now say that it is home gatherings that are driving this new surge?

"Why are we doing that when it's not really helping?" asked State Rep. Margo McDermed, R-Frankfort. "We need to be more targeted. We know more now that we knew in March. Why are we staying with the same measures when we could have more sophisticated, refined, targeted successful measures?"

"To think that maybe there's a chance we won't survive the second round is crushing to me," said Kasey Hoag, owner of the Six + Cypress Boutique in Batavia.