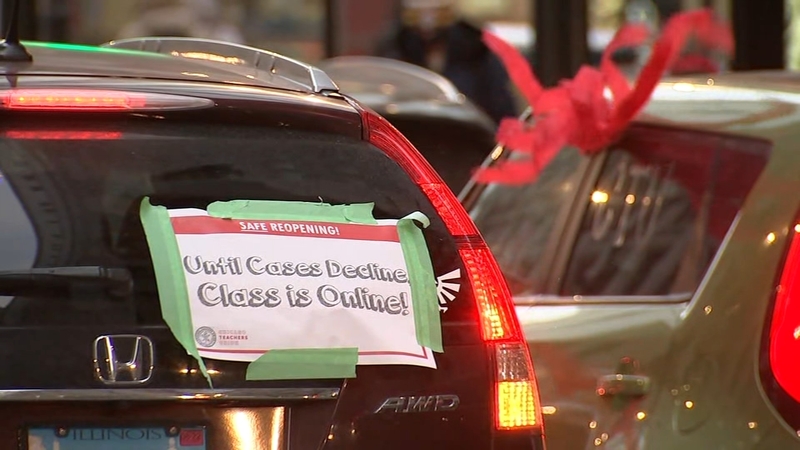 Mayor Lori Lightfoot, CPS CEO Pedro Martinez and CDPH Commissioner Dr. Allison Arwady held a news conference at 6:45 p.m. to discuss the district's next steps. Martinez said the school district is continuing to negotiate with the union, but said there will be no classes again Thursday.

Officials hope to hold some in-person instruction in defiance of the union at CPS schools starting Friday.

"So, the goal is, for schools that have the staff, is we would like to have academic activities on Friday," Martinez said. "That is the goal."

The union and CPS did meet Wednesday afternoon, but no progress appears to have been made. CPS said it's drawing up plans with the expectation kids will still be out of school all next week. The CTU vote was to switch to remote learning until January 18.

"I got up at 4:30 this morning and was ready to go online, have my Google classroom going just like we've done in the past, and I tried turning on my computer and the mayor had shut it down," said Paul Johnson, teacher at Benito Juarez High School.

CTU organized a car caravan of teachers and supporters, beginning in Union Park and ending at City Hall. Teachers said they've been locked out of their email and remote classroom programs after CPS canceled classes following the vote.

The Chicago Teachers Union is holding firm to their demand to move to remote learning during the omicron surge, now locked in a stalemate with CPS.

CTU tweeted just before 11 p.m. Tuesday night that 73% of its members voted in favor of the remote work only "job action," which they said will end when either the current COVID surge subsides or Mayor Lori Lightfoot's team at CPS signs "an agreement establishing conditions for return that are voted on and approved by the CTU House of Delegates."

CPS followed with its own tweet, saying due to the vote, there would be no in-person or remote instruction for CPS students Wednesday. It also canceled all other school programs, athletic practices and other events.

CTU is demanding all students, teachers and vendors test negative within 48 hours of returning to class. The union also wants KN95 masks, or those of similar quality, for all students and staff, as well as a return to last year's agreed upon thresholds for a move to remote learning, including a 10% or higher test positivity rate.

The union is digging in, adding demands for increased staffing to alleviate a teacher shortage. Union leadership said even before the arrival of omicron schools were understaffed.

The mayor accused CTU of moving the goal posts, while also blasting a union proposal to require students to opt out of testing rather than opt in. The union said the opt-out practice is being used in other districts.

"That we're going to be performing a quasi-medical procedure on children without their parents' knowledge or consent... it's morally wrong, it's repugnant to me personally," Lightfoot said.

"Half my kids aren't in the classroom. Some are sick themselves. Some have family members who are sick. Some, just their parents are scared to send them in," said Johnson. "And if we are teaching remote, we can teach those students."

In a statement, CPS CEO Pedro Martinez said, "I understand your frustration and deeply regret this interruption to your child's learning... We want our children back in their classrooms as soon as possible and will continue working with the CTU to reach an agreement that addresses their concerns and that is in the best interest of all in our CPS community, especially our children."

With CPS and CTU locked in a standoff over remote learning, community groups and churches stepped in to help parents care for kids whose classes were canceled Wednesday.

In its own statement, the CTU said it understood the "frustration" felt by its decision, adding, "We believe that our city's classrooms are where our students should be. Regrettably, the Mayor and her CPS leadership have put the safety and vibrancy of our students and their educators in jeopardy."

CPS had said it would cancel classes for Wednesday if the teachers voted to go remote, calling it an "illegal work stoppage" because what CTU is seeking cannot be counted as an instructional day under state law.

CPS teachers can only work remotely if they are sanctioned by the Board of Education. Teachers not in school won't get paid.

"If you want to get us back into the schools quicker, provide testing," Sharkey said.

Martinez said schools will remain open for administrators and staff, and students who show up will not be turned away.

"We will still continue to provide essential services, and we will have a plan in place whether it's for nutrition; we still have COVID testing that's scheduled in the schools," he said.

An ABC7 political analyst discussed when the CPS stand-off might end Wednesday.

Take-home meals will be available at all schools from 9 a.m. until noon Wednesday.

The Safe Haven sites listed here are available for child care Wednesday. Sites will be open from 8 a.m. to 4 p.m. Registration is available on-site, and a parent or guardian must be present with the child at the time of registration.

CPS students just returned from winter break Monday. But union leaders say the classroom is not safe for teachers, or students.

"Unfortunately, our union is again being backed into a corner of being the leader in the city that the mayor refuses to be," said Davis Gates.

"We never said that we were going to stop instruction, all we said that we wanted to shift to remote learning just for a little while until the surge goes down," Briana Hambright Hall said.

Martinez said he prefers to do targeted quarantines instead of a one-size-fits-all solution. He shared what he called a "fair" offer the district has made CTU, including the purchase of 200,000 KN95 masks for staff, to be distributed immediately, with more on the way; reinstatement of health screenings and temperature checks at schools that want them; and the creation of a tactical team to meet with CTU daily to address specific school concerns.

"It is not because I have any concerns about the schools not being safe," Martinez said. "I am trying to respond to the anxiety that exists. I think the approach we're taking, we're being responsive to the request they've made. We're trying to be practical for what makes the most sense for our district, especially a district of this size, with such unevenness of COVID."

CPS said that targeted approach to quarantine and closures is supported by the science.

"In what world would we think to close something essential like in-person education, when we have seen the negative effects of that, when our bars remain open?" said Dr. Arwady.

Dr. Arwady and Martinez said every CPS school has COVID testing in place and they are working to expand capacity.

Should parents be concerned about school return during COVID surge?

Some parents expressed mixed emotions on the current situation.

"I feel safe regardless," said CPS parent Shuddeen Harriott. "I think this is something that we're obviously going to have to live with."

"With the rise in cases, it's like any day now that somebody is going to come in contact with COVID," said CPS parent Chris Fulton Sr.

But some parents were frustrated.

CPS parents are reacting Wednesday to the last-minute cancellation of classes.

"I'm not too happy. Kids should be in school, but things gotta be safe," Edmundo Arias said.

Some CPS parents flocked to a South Side YMCA Wednesday morning for child care after the late-night decision.

"This is stressful. It's hard for single mothers and single parents and single fathers -- that's a 9 to 5 job and they work different shifts and part time, but we have to make it work. We have to have a village," CPS parents Kenetsha Brown said.

Fortunately for Brown, the YMCA had room for her 3-year-old son, who attends a school-based daycare and receives speech therapy through CPS.

It's one of a half-dozen YMCA locations, along with around 25 churches and community centers, open Wednesday for parents in need of a safe place to take their child.

"I'm frustrated about it," said Marie Dameus, grandmother of a CPS student.

Dameus only learned there would be no school for her grandson after arriving at South Loop Elementary School Wednesday morning.

And with no word on when classes will resume, either in-person or remotely, second-grader King Walker is disappointed he won't get to see his friends.

"I'm feeling sad because I can't go to school today," he said.