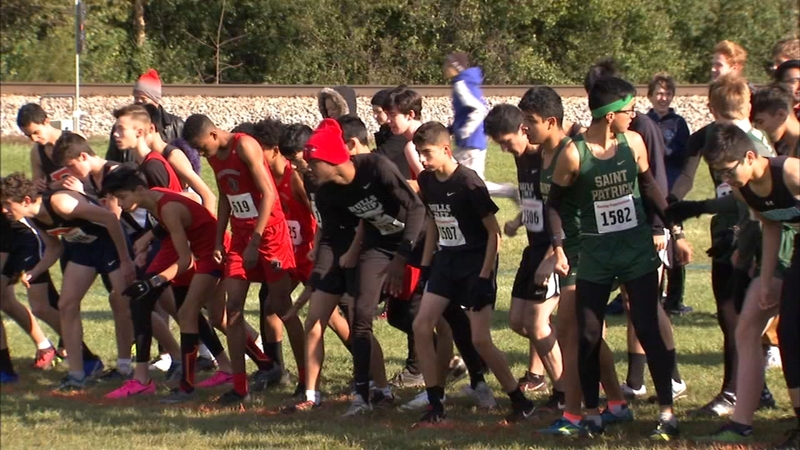 CHICAGO (WLS) -- Chicago Public Schools cross county runners barely made it to the starting line of sectionals Saturday after the Illinois High School Association forbade them from practicing during the teachers strike.

A Cook County judge granted a temporary restraining order to allow cross country athletes from Jones College Prep and five other schools to compete in sectional meets on Saturday.

Jones College Prep filed an emergency injunction after the IHSA prohibited them from practicing during the strike. Cross country runners already missed the opportunity to compete in regional meets last weekend.
Jones College Prep and the other schools argued that they should get special compensation because the strike was a circumstance out of their control. They said they worked hard and should be able to qualify for college scholarships and advance through to the state competitions.

The judge agreed, saying the IHSA's policy was too vague and that it would cause irreparable harm to students to miss sectional meets Saturday.

"We were not expecting that to work out and no idea that we would be able to run," said Tommy Donohoe, a cross country runner at Lane Tech College Prep High School.

"It was decided they would let us run the sectional cross country meet along with all the CPS athletes," said Ian Bacon, Jones College Prep cross country runner.

By rule, not competing in the regionals disqualifies the teams from advancing in state tournaments. The judge waived that rule just hours before Saturday's race.

"As we were walking over here I said, 'There's no time left on the clock. This is our last chance,'" said Kevin Sterling, attorney and father of Jones College Prep cross country runner.

"This turn of events has been a crazy roller coaster," said Shannon Tierney, a runner for William Howard Taft High School. "We were not taking a stance on the strike, we were just trying to run.

Their coach, Andrew Aldemann, is proud his athletes stuck it out and fought for what was right.

"One of the first times walking away from a meet where we didn't have our best day, but still ecstatic to see them out there," Aldemann said.

Although runners were turned down in court repeatedly, the IHSA has already approved 19 CPS football teams to compete in playoffs Saturday.

The IHSA issued a statement saying:

"The Illinois High School Association will conduct its IHSA Boys & Girls Cross Country Sectionals as planned on November 2, and will include all runners impacted by the Chicago Public Schools strike per the Temporary Restraining Order granted this evening by the Honorable Neil H. Cohen. The CPS teams will compete at the Sectional site correlated with their Regional. We prepped our Sectional hosts for this potential outcome this afternoon, and have been working this evening to get them the information necessary to expand their meets. We will have meaningful discussion with our Board of Directors, staff, and legal representation throughout the weekend as we determine our next steps."
Report a correction or typo
Related topics:
sportschicagoloopnear south siderunningchicago public schoolshigh school sportsstrikelawsuit
Copyright © 2022 WLS-TV. All Rights Reserved.
TOP STORIES
Chicago police coming down hard on retail theft rings
Conjoined twins separated after 10 hour surgery
Retired CPD officer, 57, killed in Edison Park hit-and-run
New initiative will help people who travel to Illinois for abortions
19-year-old killed in Chicago shooting
Weber Grills apologizes for ill-timed meat loaf recipe email
Family of man who died falling off party bus reaches settlement
Show More
Ring camera captures fiery I-80 semi crash that injured 2
2 NYPD officers shot, 1 fatally, responding to domestic violence call
Chicago Weather: Morning flurries, cold Saturday
Maryland man dies with more than 100 venomous snakes in his house
Man who got double lung transplant after COVID survives 2nd case
More TOP STORIES News