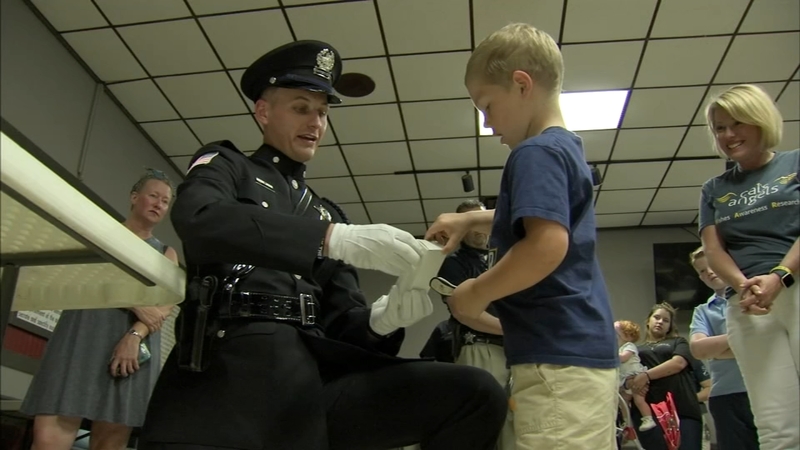 CROWN POINT, Ind. (WLS) -- Cameron Baker, 5, of Crown Point may be little, but he already has a big resume. Wednesday he became a Lake County junior sheriff and honorary member of the Fraternal Order of Police in Indiana, with a new badge to provide it.

But his most important title so far is cancer survivor.

"Nothing ever prepares you for, to hear those words that your child has cancer," said his mother Susanne Baker. "But, from day one, there was always a sense of hope."

Cameron was diagnosed with stage five Wilms' Tumor, a rare form of kidney cancer, in the fall of 2020. Wednesday, he and his family celebrated his last chemotherapy treatment.

"Today was joyous and a little sad," said Jason Baker, father. "Really, words can't express the journey that we've been through."

The monumental moment was made even more special by the Lake County Fraternal Order of Police who, together with law enforcement from all over Northwest Indiana, planned a surprise special ceremony, complete with a full police escort and honor guard salute.

"We had Hammond, we had Merrillville, we had Crown Point," said Jim Tomko, president of the Lake County FOP Lodge #125. "We just rolled with lights and sirens on, and he was shocked."

Cameron stood in awe, surrounded by his personal heroes, as officers stood equally in awe of what this young boy had overcome.

"He's 5 years old and he's, he weighs 45 pounds. It's just amazing what this little boy's endured in the short life he's had on this earth," Tomko said.

"To have the end of our journey with cancer culminate with such a celebration, and just the selfless acts of so, so many, it truly is just incredibly heartwarming," Susanne Baker said.

Thankful that he has so much more life to live, Cameron's parents said he's already given them inspiration they hope spreads to others.

"Cancer doesn't have to be the end," Jason Baker said. "You can fight. And you just have to stay positive. He's proven that. He's Iron Man Cam."