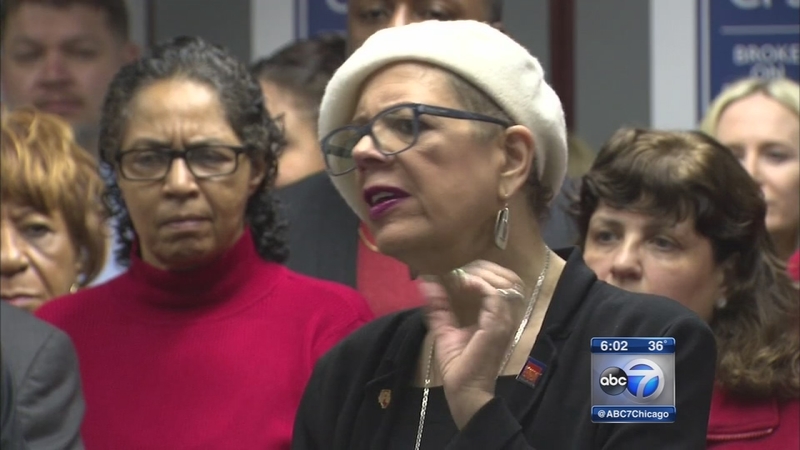 Claypool said school support staff will likely bear the brunt of the layoffs - teaching assistants, clerks and other administrative roles. A letter to CTU President Karen Lewis from Claypool says the workforce cuts will save $50 million.

Claypool says he is out of options, standing with other school executives to announce layoffs and pension deductions for teachers. They said the actions are needed to address the system's budget deficit.

It would be up to each principal to determine the most feasible cuts for their school, Claypool said. Claypool said CPS will do its "very best" to avoid teacher layoffs.

Claypool said they will also begin deducting 7 percent from all CTU members' checks as soon as possible due to an inability to meet the pension pickup for teachers. Claypool says the schools will save $130 million with that action.

Lewis and CTU vice president Jesse Sharkey said the cuts CPS set out Tuesday in response to the rejection weren't cuts in the contract.

Lewis called the cuts an "act of war" and expects the union will rally against CPS and the "bankers who are siphoning off millions" and announced a demonstration at 4:30 p.m. Thursday and LaSalle and Adams.

Lewis admitted the current administration have inherited a lack of trust from the prior administrations, but stressed that some of the administrators are the same.

Lewis said the deal CTU rejected would have pushed out 2,200 experienced educators and would've impacted black and Latino members most. Lewis claims the contract would also have increased class sizes to 45-50 student class sizes

"What's he gonna take us over with? He has no budget. He has no authority. Please don't pay attention to the ravings of a madman," Lewis said of Rauner.

"He has a charter school named after him," Sharkey said.

Regardless of what happens, parents are afraid of the impact on their children.

"Anytime you have a cut it's going to affect the education of the kids," said Bill Perales, a parent.

"I don't know where all the money is going but it's not going to schools," said Fred Cosby, a parent.