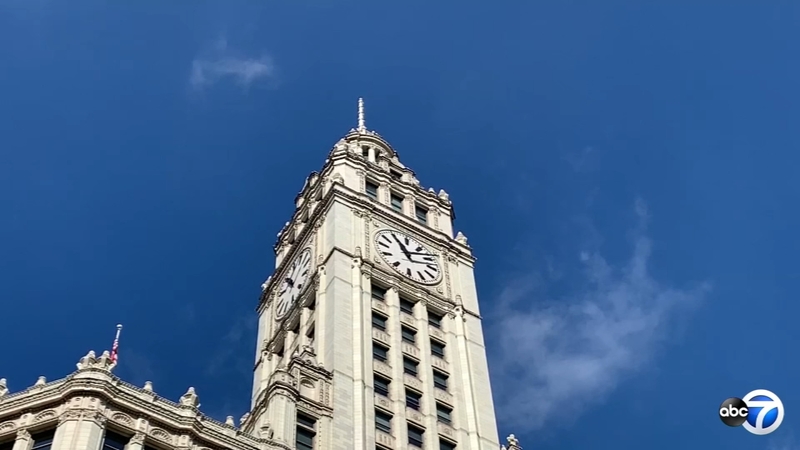 Daylight saving time 2020: The clocks that keep watch over Chicago

CHICAGO (WLS) -- This Sunday, most of the country will sacrifice one hour less of sleep in exchange for longer evening daylight in the summer months.

Clocks will need to be turned forward one hour from 2 a.m. to 3 a.m. as daylight saving time begins on March 8.

That includes the iconic clocks around Chicago that help keep time for commuters and tourists.

But it's not a little old man that manually sets the time on those historic timepieces.

These days, most are changed automatically.

Wrigley Building's clock tower at 400 N. Michigan Avenue, was completed in 1920. Its multiple faces and prominent positioning help keep time for people coming in all directions.

"We are still a bit more hands on with our clocks, we are automated but it does take the engineering team to collaborate from visuals on the ground for our four dials," said Bradley Borowic, vice president of the property management group, Zeller Realty.

The ornate clock that's mounted on the third floor of the Jeweler's Building at 35 E. Wacker Drive, was donated to the building by one of its first major tenants, the Elgin National Watch Company. The company's logo was Father Time, who is represented in the form of a little sculpture on top of the clock.

A pair of ornate clocks are anchored at each end of the Macy's State Street store, formerly Marshall Field's.

"In the past, the clocks were impulse operated from a master timepiece located in the store that was checked twice daily with the Arlington time signal and corrected each hour," said Ng. "Today, the clocks are on a GPS system that changes automatically, allowing the clocks to be precise to the second."

Each clock is made of 7 tons of cast bronze and hangs from ornamental ironwork. Originally, the clocks were black, but over time they assumed a distinctive green patina, according to Ng.

Along the Chicago River, between Clark and LaSalle, sits the Reid Murdoch Building's clock tower.

Designed in 1914, the building was constructed as a food processing company and warehouse but it's now home to the World of Whirlpool.

The time on the clock tower is switched manually on Monday morning, according to Lauren Landri of Friedman Properties.

"The Engineer goes up to the clock tower and there is a set of controls there that say, run, stop and fast," said Landri. "Since we are going ahead an hour, he will be using the fast control to change the time."

Moving south to the Printers Row neighborhood is the old Dearborn Street Station's 12-story Romanesque clock tower. It was completed in 1885 with the last passenger train leaving the station in 1971. The building now houses commercial and retail space.

The clock was rebuilt a few times since the tower has caught fire over the years and burnt down more than once, according to the General Manager of the Dearborn Station Management Company, Nicholas Novelle.

"No Quasimodo up there toiling in the clock work gears," Novelle joked. "To change or correct the time showing on the clocks, we have a set of switches in a storage area for both the interior and the clock tower clocks."