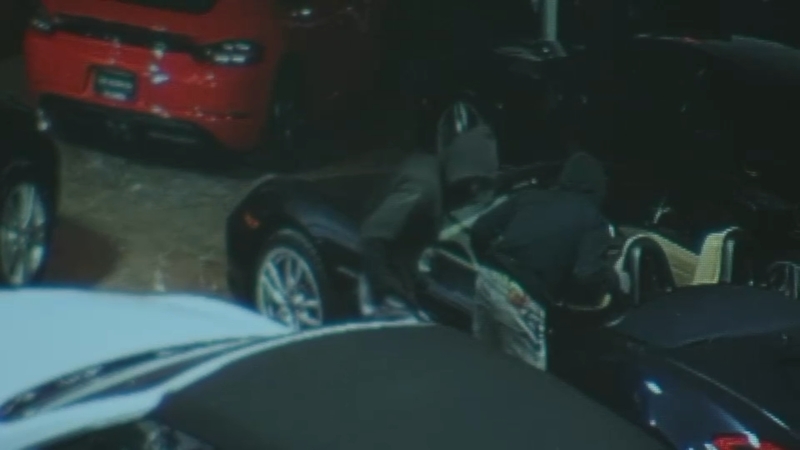 EVANSTON, Ill. (WLS) -- More than a dozen high-end vehicles were stolen from the Autobarn Collection in Evanston on Monday, according to police.

"It was almost like they were just shopping, and actually paying for something," said Sam Mustafa, co-partner, The Autobarn Collection.

The thieves were caught on security footage arriving in what police believe was a stolen SUV just after 2 a.m. Monday morning at the dealership located in the 1900 block of Greenwood.

"Just a state of shock. I couldn't believe it," said Mustafa.

They can be seen using an object to break through the glass and once inside, tearing the alarm system out of the wall, then stealing 14 luxury cars within a matter of six hours.

"It's just incredible to me the amount of moxie that they had to come back time and time again, taking more cars each time, with no fear," Mustafa said.

The stolen vehicles include Porsches, Mercedes and Audis, and together are worth just a hair short of $1 million, according to Mustafa.

"The offenders' ability to disable to audible alarm was definitely a facilitating factor to them being able to take 14 cars and having the time to do so," said Cmdr. Ryan Glew, Evanston Police Department.

Police are now searching for the thieves as another concern for investigators lingers.

"These stolen high-end vehicles, they're very fast, luxurious vehicles, are used in other crimes," said Mustafa. "So, that is a concern but we should know within a couple of days if that is the case in this theft."

Mustafa said they have insurance to help replace the vehicles but they are still hoping the suspects get caught.

"I think they're going to find them. We have trackers in some of the cars. And the detectives are working hard to track these people down and I will show up to every court date. I will not miss one," said Mustafa.
Report a correction or typo
Related topics:
evanstonauto thefttheftburglaryporschecar theftmercedes benzsurveillance video
Copyright © 2022 WLS-TV. All Rights Reserved.
AUTO THEFT
Car stolen with girl, 3, inside in South Loop; suspect at large: CPD
Car stolen with child, 3, inside in South Loop: CPD
9 vehicles stolen from luxury dealership on NW Side, police say
Chicago shooting: Gary man charged after another shot in South Loop
TOP STORIES
Teen charged in boy's shooting death near 'Bean;' curfew enacted
10 killed in Buffalo supermarket attack police call hate crime
Tenants call for action after 3 found dead in North Side building
Boy, 14, killed in north suburban shooting, police say
Police release names of victims killed in mass shooting at supermarket
Arby's manager urinated in milkshakes for sexual gratification: police
2 killed, 2 hospitalized after rollover crash on I-290, ISP says
Show More
31 shot, 5 fatally, in weekend violence, Chicago police say
1 killed, 5 hurt in California church shooting, authorities say
'American Idol' contestant from Illinois makes it to Top 5
A total blood moon eclipse is happening this weekend: How to watch
Mars Wrigley issues recall of several gummy candies
More TOP STORIES News